The Exigent Duality
The 3DO Model Won - 11:29 CST, 11/25/21 (Sniper)
A little over a year ago I wrote a pair of blog posts regarding my initial impressions of the Xbox Series X and the PlayStation 5. It's hard to believe a whole year has gone by since then.

On a persoanl note, so much has changed in my life: I've sold my Murderapolis property, relocated my family permanently to the bug out house, have a perhaps eighty percent complete addition project, have weathered and survived tremendous government overreach and delusion societal meltdown regarding the WuFlu, and most importantly have devoted myself to Jesus.

It's also tough to believe it's been a whole year when just looking at these two machines, but for the opposite reason. There is no discounting their fast loading times, how quiet they are, the effortless way they handle last-generation games at sixty frames per second, and even how impressive are the small glimpses we've seen of their full potential: I'm looking at you, "Rift Apart".

But my overall impression has been that they are the most underwhelming upgrade of any console generation in history. There has been no "Sonic 3 to The Need for Speed" Genesis-to-3DO moment for me. Or a "Crash Bandicoot to Sonic Adventure" transition. I suppose this isn't surprising, given the intrinsically diminishing returns of adding yet more triangles and pixels, and given the slow-down in Moore's Law.

There is very little I can even say about these systems that I didn't already say twelve months ago. Nothing has changed. They are still "last gen games with more trees and grass" machines. Games look pretty much identical on a "PlayStation 4 Pro", just at thirty frames per second instead of sixty. The Series X still doesn't have an HDR dashboard, albeit it at least draws in 4K now.

So instead of repeating what I said last year, I'd like to make a different observation.


One Standard to Rule Them All

Back in the very early 90's, then-CEO of Electronic Arts, Trip Hawkins, was in the middle of having his guys reverse-engineer the Mega Drive's copy mechanism. The story has been told a thousand times, so I won't repeat the whole thing here, instead only commenting that having pulled Sega's teeth to get that sweetheart licensing deal, he said "never again".

So he came up with a new vision: what if video game systems worked like VCRs? You'd just pick whichever brand you want, the "players" would all run the same games, while the manufacturers would compete on price and frills-extras? Game designers would like the low licensing fees, and only needing to focus on one set of specifications. And thus, the 3DO was born. Each model had a little different casing, but had a compatible double-speed CD-ROM drive, and the same Dave Needle-designed "guts" inside: 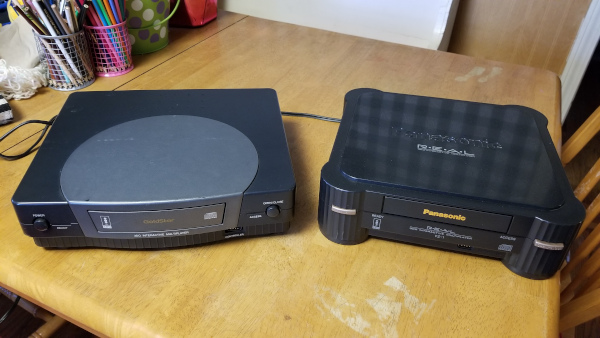 The LG and first Panasonic 3DO models

Every model had an ARM60 CPU, two "Cell Engine" graphics co-processors, three megabytes of total RAM, an incredible custom audio DSP, and integrated SRAM storage. Even the controllers were materially identical. While each manufacturer went with slightly different ergonomics, they all had the same buttons: 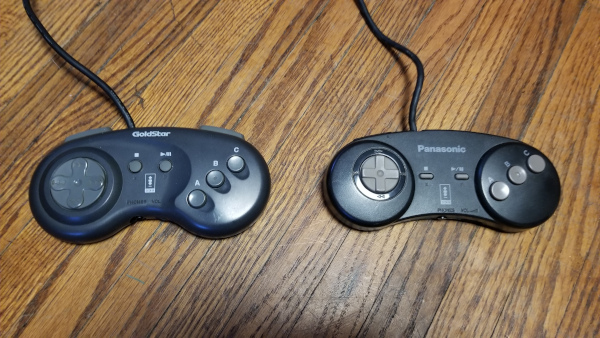 The controller button labels also helped facilitate media playback. Headphone jack and volume was also standard on most 3DO controllers.

When you would play games across the different 3DO models, you might notice that the black levels were ever-so-slightly-different, or that loading times synchronized music differently, as seen in the "Super Street Fighter II Turbo" intro when running on the LG and Sanyo units, versus the Panasonic ones. But other than that, all 3DO systems delivered more or less the same experience and compatibility.

Even product packaging was similar, advertising the same features, with just a little different spin on the branding: 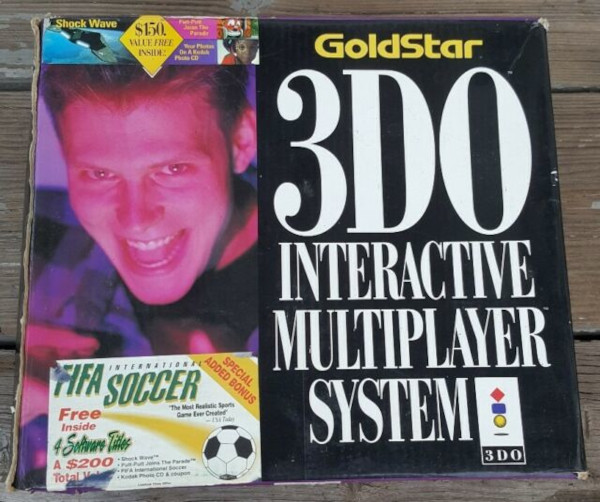 LG's branding for their Goldstar unit. 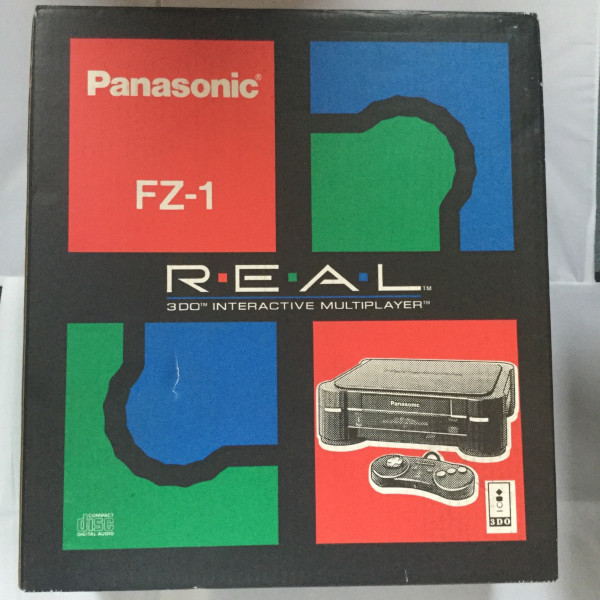 Matsushita's branding for the Panasonic models had a different flavor.

Trip's business model itself worked fabulously: as like what happened with VCRs in the 80's and 90's, competing manufacturers drove the price of 3DO units from $600 all the way down to $250 by the time the PlayStation and Saturn had come out. However, the 3DO's 1992-era design had some architectural bottlenecks, and it wasn't quite able to compete on a technical level against these newer systems.

Of course, as we would later discover thanks to homebrew developers the 3DO hardware in fact has no problem running hallmark games like Tomb Raider-- but at the time, the perception was that the 3DO was punching above its weight, and perception is all that matters. Not to mention, Sony's incredible PSX marketing blitz not only steamrolled the 3DO, but the Jaguar, Saturn and Nintendo 64 as well.

Alas, Trip Hawkins's "one standard to rule them all" convergence wasn't meant to be. Or was it?


The 3DO Model Realized

In 2021, Sony released their PlayStation 5, while Microsoft pushed out their Xbox Series consoles. Both systems were pressed in the philosophical mold of 2001's original Xbox: from an instruction perspective they were x86 / x64 PCs. Different styling cues were at play, but outside of a very tiny handful of exclusives they ran the same software, and had almost identical "guts": 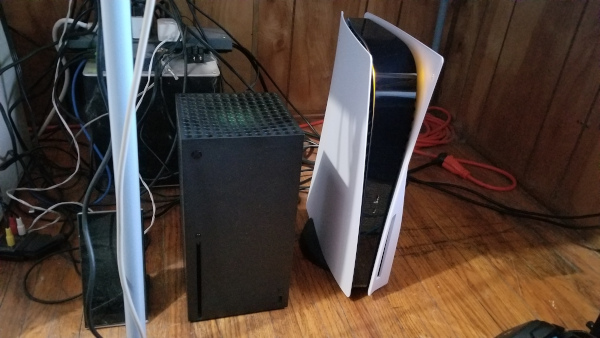 Their housing looked different, but their internals were almost identical.

They both had UHD Blu-ray optical drives, fast solid state hard drives, the identical RDNA system-on-chips just with slightly different clock speeds and "CU counts", and the same sixteen gigabytes of RAM. Developers could use the same engines, assets, and code across both platforms.

They both even used materially identical subscription-based online service models; they both supported screenshot and video capture plus editing; and they both outputted at the same resolutions. Their controllers had mildly different ergonomics, but the same standardized button layouts. 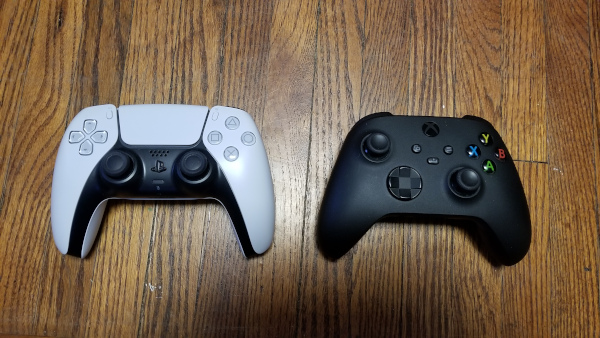 The controllers were the same. The manufacturers competed on ergonomics and frills, such as Sony's more advanced rumble feature.

When you browsed store shelves, it became immediately obvious that no matter which platform you selected, ninety-plus percent of the games ran on both systems, with nearly identical appearance and performance. The packaging demonstrated different marketing takes on what were essentially the same products: 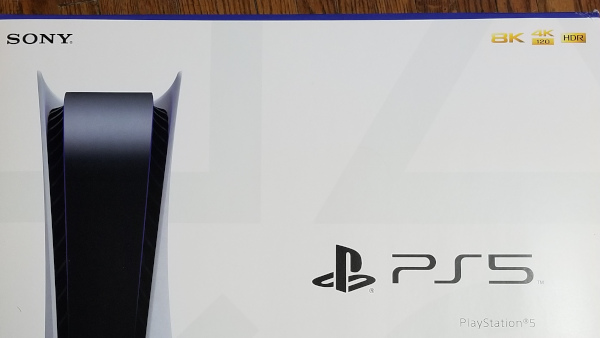 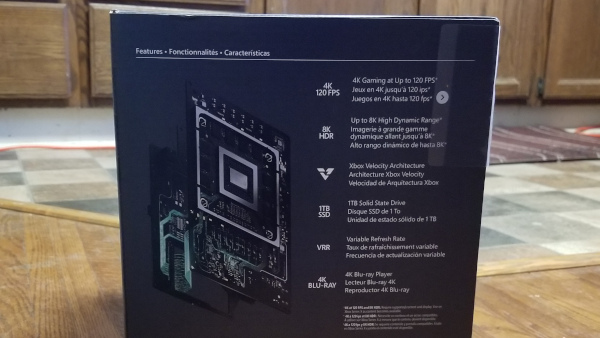 As he was apt to do, Trip Hawkins had the exact right idea and could see the inevitable direction, only a bit before the world was ready for the execution. The PlayStation 5 and the Xbox Series consoles were the realization of the 3DO model: you picked your favorite brand, with the frills you wanted and at the price point you found desirable. Your "player" of choice would then run whatever games you wanted to play.

Right now, the two companies still have some of their own software: for example, Microsoft has "Forza Motorsport", while Sony has "Gran Turismo". But even that may not be the case for much longer. In 2017 Microsoft promised that all of their games would come out simultaneously on the IBM PC. They have subsequently followed up on that promise in a universal way. Earlier this year, Sony made strong intimations that they are headed in the same direction.

Perhaps Trip's model was so forward-thinking that he didn't take it far enough, and everything will simply converge on the PC? Only time will tell. But for now, let's enjoy the 3DO vision, with all of its benefits.