The Exigent Duality
Series X Initial Impressions - 18:47 CDT, 11/10/20 (Sniper)
My Xbox Series X came in yesterday, and I spent last evening getting it hooked up, and installing a couple of games.

My son unpackaged it with me, and our first reaction upon pulling it out of its packing sleeve was just how small the unit was compared to what we were expecting: stack about two-and-a-half Gamecubes one on top of the other, and you've got this system. Its small size is difficult to capture in a photograph, but in person it strikes the eye as having substantially less of a cubic footprint than the enormous-by-comparison PlayStation 4 Pro.

In fact, I'd go so far as to call the Series X cute: the concave fan vent with its green accents mark the high point of the design, both literally and figuratively.

Pre-AA battery insertion, its controller feels similar in heft and button build quality to the twenty dollar Logitech F310 I've used with my PC for many years: take that as you may. To my hands, it's comfortable to hold, and the buttons have nice travel. The d-pad emits audible clicking noises when pressed. The overall controller design is minimalistic then, but it's all you need, and nothing you don't. 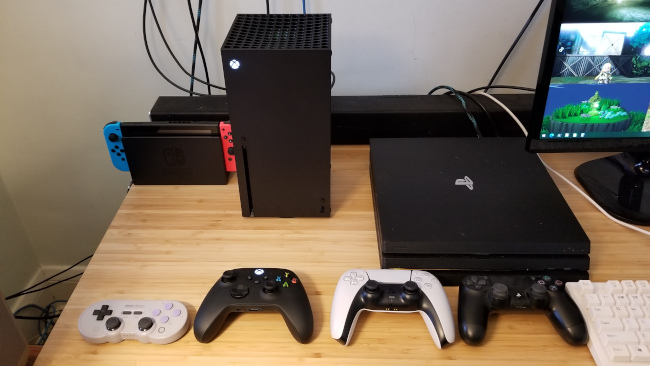 The first game I installed was "Gears 5", a title I'd already beaten and enjoyed on Windows 10.

But before I get to that, and as a side note, in attempting to locate the game via the dashboard interface's "Game Pass" section, my son and I were nearly beyond belief at the sheer volume of games an owner of this system can install for free, provided their membership is paid up: we didn't count the titles, but there must have been hundreds of them, ranging from the very latest Microsoft first-party blockbusters, to pixel-based indie games, to Xbox 360 releases, to almost Electronic Art's entire back-catalog from the past several years, including all of the annual sports titles.

There are so many games to install that, content-wise, they could probably last someone through this entire upcoming generation. Unfortunately, there isn't a single piece of content which actually shows off the hardware-- and it's this first let-down that leads me back to the aforementioned "Gears 5".

It runs at some kind of 4K, either native or otherwise, locked at sixty frames per second, with HDR10: so, great news! But it's not exciting either, because it merely provides the identical experience I'd already had with the game long ago compliments of my Ryzen 3600x PC and its RTX 2080 video card. 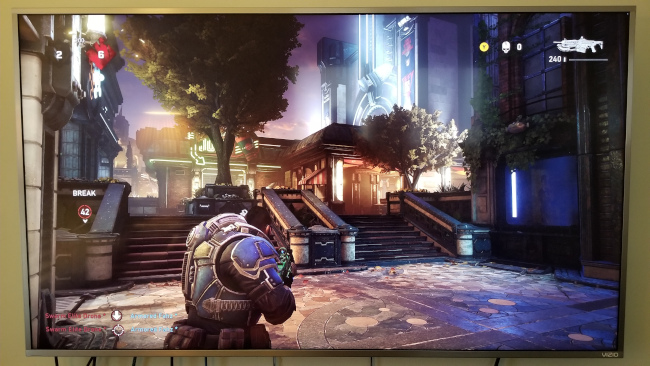 The second let-down is that there is a huge disconnect between the user interface, and the games themselves. When you hit the controller's Xbox button, you get a dim slider menu, with blurry low-resolution fonts. If you choose the "Home" option, your whole TV has to spend several seconds blanking and flashing as it switches resolutions from 2160p HDR, to 1080p SDR. Then if you choose to resume a game, its the same exercise for your TV but in reverse this time. 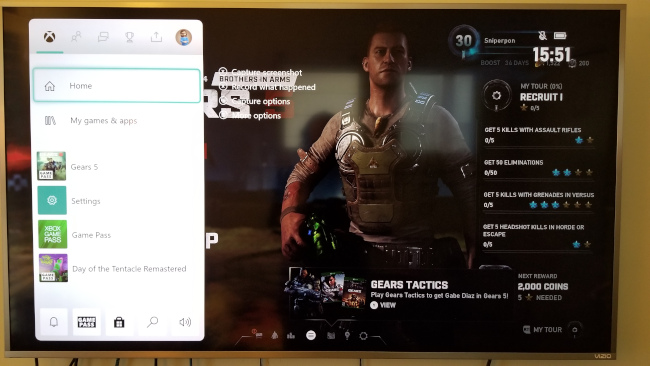 Speaking of the dashboard, it is, as mentioned above, 1080p and SDR only: just how dim and outdated it looks compared to the actual games, or even as compared to the PlayStation 4 Pro's interface quite frankly, is also difficult to fully appreciate in photographs. But in person, it looks and feels out of place in 2020.

Curiously, the platform's most advertised system feature-- the so-called "Quick Resume", which apparently keeps several games suspended simultaneously, for instant resumption-- was totally non-functional for me with the two games I tried: flipping between "Gears 5" and "Day of the Tentacle Remastered" caused each game to restart from scratch each time. Go figure. 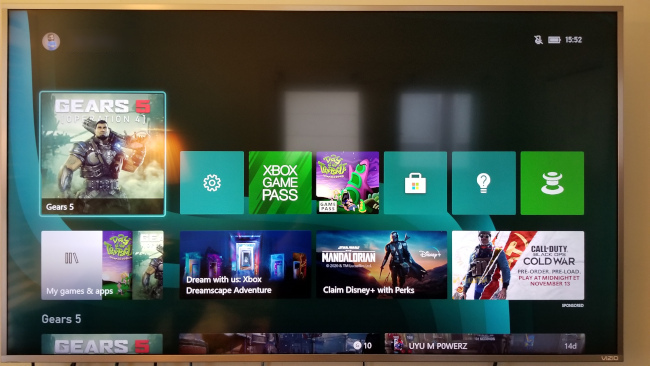 All-in-all and for better or for worse, nothing shows off Microsoft's commitment to the Agile methodology like the Series X: clearly, their focus "this sprint" was to nail the hardware, and get it out the door. To their credit, they've achieved great success in this department, with a system that is pleasing to the eye, is virtually silent even under full load, and which even triggers a bit of Xbox 360 nostalgia with its user interface sound effects and controller layout, as the console's giant fan gently vents invisible plumes of "new electronics" smell into my office.

Over the next twelve-odd months, I'm certain we'll see "sprint two": a brand new, modern-day 2160p HDR user interface, along with true next-gen game fruit borne of their corcucopia of recent third-party acquisitions. Those twelve-plus teraflop "Big Navi" biceps are there, just waiting to be flexed. Even as-is however, the Series X is the best way on the planet to play multi-platform titles this side of a nice Windows 10 setup, so I would recommend it even today for those with the cash.

Meanwhile, I have a PlayStation 5 showing up via Walmart anywhere from this Thursday to next Monday-- and from what I've read, Sony took a very non-Agile approach in getting all of their ducks in a row right from the get-go. Expect an equivalent blog post regarding that new system in the coming several days.

Edit: I went on to evaluate the system's backwards compatibility mode here.