The Exigent Duality
PlayStation 5 Initial Impressions - 19:28 CST, 11/14/20 (Sniper)
As I've already done with Microsoft's Xbox Series X, what follows are my impressions of the bizarre looking PlayStation 5: it's Sony's turn under the grueling lights of judgement.

Where the Series X surprised both my son and me by being smaller and better looking than we'd expected, Sony's new machine evoked the opposite reaction. It almost impossibly manages to be even larger and more homely than it appears in photographs, where it had been growing on me. The biggest issue is its height, which gives it freakish and unsettling proportions.

In complete contrast then, the two-tone controller is perhaps the prettiest video game input device of all time, with its wonderful black analog sticks and strip, the latter of which stretches down the grips like the color-contrasting paint of an exotic hypercar. It feels solid and weighty in the hands, with the soft button and d-pad feel for which PlayStation controllers have always been known. 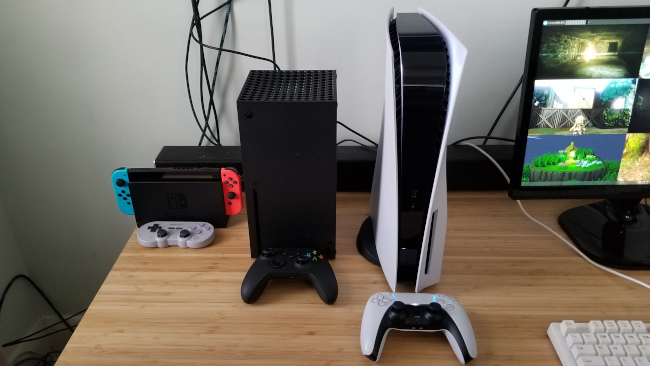 Today, I marathoned-to-completion the pack-in title, "Astro's Playroom". Even though the game doesn't attempt to push the system's graphical capabilities to the max, it still presents the combination of materials quality, framerate, resolution, and lighting sophistication that belies the console's muscle.

More importantly though, it introduces the player to two of the system's best features: the controller's advanced rumble functionality, and the PlayStation 5's proprietary, custom 3D audio silicon.

On the first count, the resistance-based triggers can seamlessly perform feats such as requiring unusual amounts of force to "snap" them past a certain threshold, almost as if they'd been glued in place. It's startlingly impressive that this sort of behavior is even possible with haptics. During one game level, rain piddles onto an umbrella, and the sensation this produces via the controller is remarkable.

On the second count, and as described as a possible approach by Mark Cerny some months ago, the system does in fact ship with selectable 3D audio profiles, five of them in total. The system plays a gargling brook sound, while the player selects which version gives an "at ear level" impression.

"Astro's Playroom" amply demonstrates two points regarding this new audio chip: first, that this faux-surround sound isn't as effective as specialized surround-oriented headphone hardware: however, that it still provides a fascinating depth and breadth to the sound which wouldn't be present ordinarily. 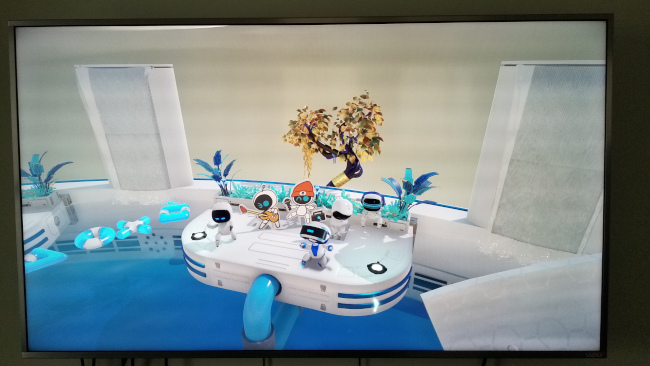 The system dashboard is instrumented into the titles themselves, for example by allowing the player to warp between different game levels. Even better, it's in native 2160p, with HDR. Aesthetically, its iconography and menu fonts are fetching, while the experience of jumping between games, settings, friend list, and other sections feel very natural.

Sony did opt for the Nintendo Switch route of only showing the player's most recent games, dropping the rest off the end of the list into a "Game Library" dumpster. Now PlayStation 5 owners can join the "please give us folders" chorus. 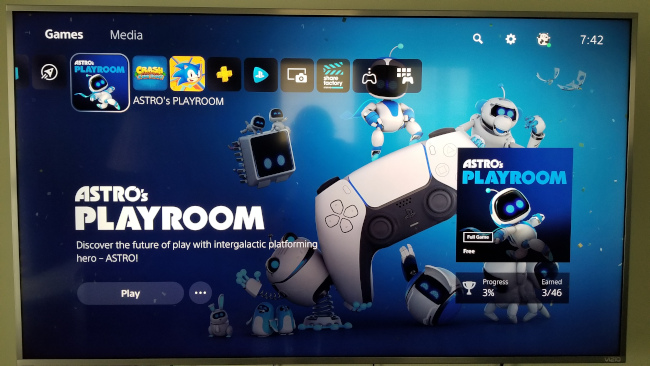 Sony and Microsoft are the "Metallica" and "Megadeth" equivalents of the video game industry respectively, with the Series X filling the role of "Countdown to Extinction": a beautiful second place on the charts, only to still get beaten by their arch-nemesis. While Phil Spencer was getting the Redmond giant's video game house back in order, Sony managed to score a hole-in-one.

It may evoke panic and dread if viewed by a sleepy owner immediately upon drifting out of a deep slumber, but every other aspect of the PlayStation 5 feels crisp, polished, and innovative. Simultaneously, it feels familiar and comforting to those who have been playing the plethora of previous Sony platforms as shown off in "Astro's Playroom".

And speaking of the pack-in title, it's a gem given its zero dollar price and intended purpose. It's not "Wii Sports", in that no seventy five year old great grandmother is going to have an interest in it-- but for the average video game player, it will get them excited to buy more PlayStation 5 software.

On that point, perhaps Microsoft's "Game Pass" isn't going to be as large of a competitive advantage as once thought. After an uninterrupted day with the hardware, it's difficult for this writer to imagine Sony having a difficult time selling games for this platform.

Finally, early cross-platform software seems to indicate that the PlayStation 5's performance perhaps isn't materially behind the nominally more powerful Series X after all. But even if those outcomes don't quite hold, the PlayStation 5 is an easy recommendation.