The Exigent Duality
Swindling the CPU in Madden - 04:53 CDT, 9/16/22 (Sniper)
Since I'd been having so much fun in Pro Evo, I decided to pick up Madden NFL 23 on the PlayStation 5. The game itself is sort of a train wreck, as I detailed in my review-- but that't not stopping me from tweaking the heck out of its gameplay via "sliders", and from having fun with the front office management. Observe this screenshot for example: 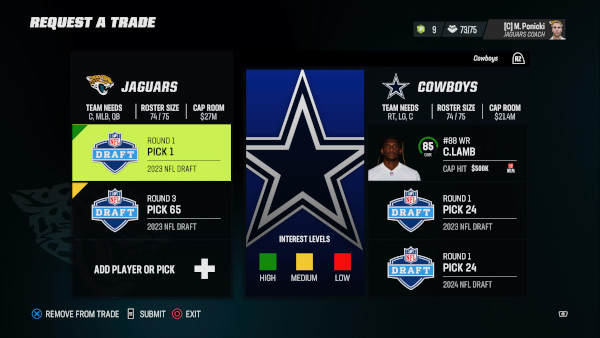 Because my team-- Jacksonville-- had finished in last place the prior season, the game's AI treats that club's next two batch of drafts as also having the same position. This is obviously not going to be true, as with my sliders all tweaked I'm most likely going to make the playoffs, if not win the Super Bowl. Yet the game will still treat these two picks with "pick number one" trade value!

Returning to the above screenshot then, I'm trading up in the first round-- not down, up!-- plus getting the other team's 2024 first round pick, and one of the best receivers in the entire game, all in exchange for a third rounder! It's total daylight robbery, and I did a ton of clever trades like this, using even my lower-round picks to accumulate good players, and additional draft selections. Also, rather than cutting players to get down to the 53 man roster, I bundled up and traded those players for even more picks.

By the time I was done, my team's overall rating went from the high 70s to the low 80s, I'd freed up cap room, and accumulated something like 14 picks in each of the next two drafts. So now instead of starting with the stock crappy Jaguars team, I have a few genuine superstars to build around-- and I can do that building via tons of 1st-3rd round picks over the next two seasons.