The Exigent Duality
The Fourth Turning Modern-Day Reflections - 09:28 CST, 3/12/22 (Sniper)
1997's "The Fourth Turning" is a seminal book, and there are so many good things to say about their model that one could probably write a shorter "meta book", about the book itself. But here I've plucked out a couple of things which really caught my eye. Maybe I'll do more posts like this in the future as I continue to work my way through the work.

Skim through this post of mine, from last year. In it I wondered if there had ever been a culture which had subverted itself. I also reflected on how I liked old people back when I was a kid, but not in adulthood. This chart answers both of those questions: 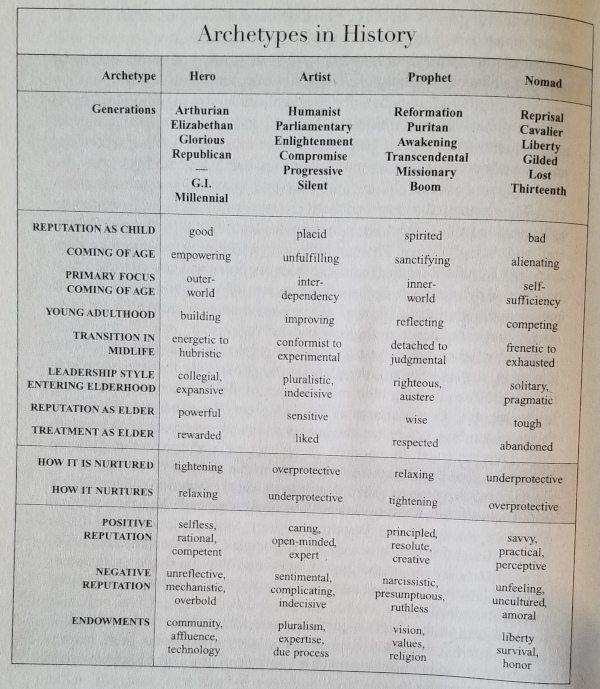 According to the authors' model, history repeats in patterns of four, twenty-odd year, single generation-long segments. Every eighty-odd years there is a major crisis, and the cycle starts over.

A crisis occurs, and a "Hero" generation fights and somehow resolves the crisis, either for good or for bad. Their own kids-- an "Artist" generation-- come of age during the crisis: so they are hugely overprotected, as their childhood is fearful and anxiety-ridden as they watch the adults in their lives scramble, with bombs potentially dropping or genocides being committed-- or whichever form that particular crisis takes.

Sensitive and wishy-washy, this "Artist" generation underprotects its own kids, because the crisis is resolved and the world is comparatively safe. Also, not wanting to have their children be "under the thumb" like they were as kids, or for their kids to have a childhood filled with worldly conflict like theirs was, they spoil and overindulge their kids. This produces a "Prophet" generation.

These "Prophets" rebel against their own apathetic parents and the values of their grandparents-- the "old order". Arrogant and hubristic, they deliberately subvert their own cultural norms. In their righteous furor, they raise their own kids-- a "Nomad" generation-- in a sort of lecturing kind of way, while simultaneously giving them very little practical life direction or supervision. This leads to these children being kind of "checked out", amoral, and apathetic.

By now things are starting to unravel in culture due to the meddling of the "Prophets". The "Nomads" go on to have kids of their own in a much riskier, crime-filled, unstable environment. As such, they overprotect their children. But the children, looking for strength, find it in their self-righteous hubristic grandparents. As such, they start to adopt those values, and become activistic.

As they grow into young adulthood society essentially collapses, and they become the new "Hero" generation which resolves the conflict in one way or another. During this time they give birth to a another "of age during the crisis" batch of children-- new "Artists"-- and the whole cycle starts over.


The answer to the question "has there ever been a culture which subverts itself" is "yes"-- in fact, once every eighty years, throughout the entire recorded history of mankind! The book's authors give tons of examples, going back to the Romans and even back to the time of Moses.

The reason I liked old people during my childhood but not during my adulthood, is because the old people were a different generation! When I was growing up in the 1980s, the sensitive "Artist"-types were the half-retired ones driving my school bus, with the "Hero" guys making up the elderly. In adulthood, the people older than me were increasingly represented by the "Prophet" Boomers-- a preachy generation I struggle to get along with to this day.

In this post I discuss how I don't fit into either "Generation X" or "Millennial"-- hence why sociologists have somewhat recently coined the term "Xennial". According to the authors' chart above, I'm significantly more "Generation X" than "Millennial". I was and am:


Even the bottom-most portion of the table-- the "savvy, practical, liberty, survival, honor" and so forth-- fits me much more accurately. By contrast, the "selfless, unreflective, overbold, community" Millennial items just don't fit. I am not a "collegial, expansive, empowering world builder", to put it mildly! In fact, I roll my eyes at all of those things.

This also explains part of why contemporary video games annoy me so much: they are made for the cringey, eye-roll inducing values of the "Hero" Millennials. Whereas my favorite games, like "Star Control 2" or "Guardian War", are more abstract and absurd. Likewise, my favorite films-- movies such as "Blade Runner" and "Apocalypse Now"-- have these brooding sort of monotone anti-heroes, and themes where there are no "good guys".

Changing gears a bit: probably every cycle participant in history thinks "things will be different this time"-- but perhaps something has broken the model, or at least greatly extended the "unraveling" period? Read this passage: 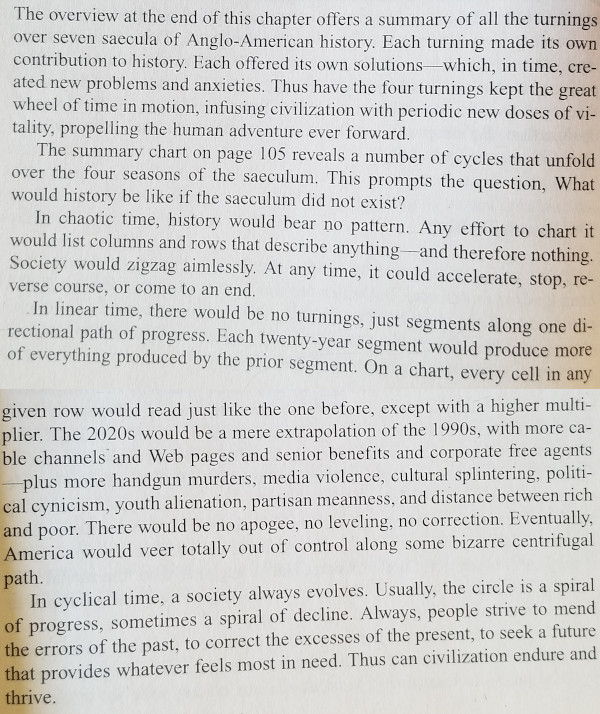 Is not the paragraph starting "In linear time..." exactly what we are seeing today, down to the very last letter? It's like the unraveling cycle in the 1990s got "frozen in place", and just kept accelerating! We should be well into concluding the "crisis" by this time, but it seems like it hasn't even truly started yet.

Furthermore, I'm struggling to see how the Millennials are going to resolve much of anything: they were so overprotected that most of them are thin-skinned to the point that they can't even function on a day-to-day basis. Many of them can't even figure out if they are boys or girls, for Pete's sake. They are "pharmacologically disabled", as I once humorously heard them described.

And from what I've seen of the ones who actually are having kids, they are the most intense "helicopter parents" I've ever seen, to the point of being totally irrational-- which seems to break the model as "Heroes" usually underprotect their kids. I know one Millennial who takes a picture of his kid every single day, and keeps this exhaustive diary of when the child poops. It's weird and obsessive.

This behavior lends credence to the fact that the "unraveling period" never ended when it should have, and just kept accelerating. So rather than the Millennial's kids becoming "Artists", it's like they'll be "Heroes +"-- a second consecutive "Hero" generation-- because they are being overprotected to an absurd degree. From what I've heard about contemporary school children, they are even more thin-skinned and neurotic than their parents!

In any event, America is indeed "veering totally out of control along a bizarre centrifugal path." Maybe as an exercise I'll try to track down more recent writings from the book's authors, to see if they've adapted their model, or have reflections about the post-1990's state of affairs.