The Exigent Duality
Digitized Sprites Resuscitated - 19:53 CDT, 9/01/22 (Sniper)
I made a tech demo in Godot Engine showing off what could be done with digitized sprites in the modern era. 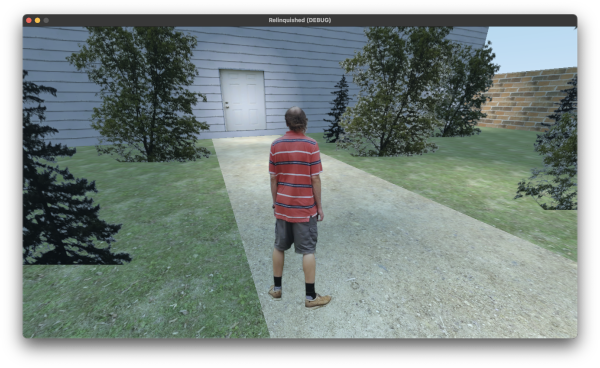 Download the Windows .exe here. Arrow keys move, Z and X rotate the camera. I only spent a few hours on it, so it doesn't have much collision detection, and everything is a "billboard", so you'll see some spinning trees. And the walking animation turned out hilarious, I only used a few frames and spent basically no time on it.

The point I'm trying to make with it is, why in the heck does "Links 386" for DOS from 1992 or whatever look more realistic than modern golf games? Imagine how absolutely crazy something like "Road Rash 3DO" could look with contemporary 2048x2048 sprites? And that's exactly how I made this demo: I walked around taking pictures of trees, grass, and so forth, quickly cleaned them up in The Gimp, and plugged them right in. The character is obviously me, my daughter took pictures of me against the "green screen" of a white garage door.

Incidentally, I created the song myself in Apple's "GarageBand" in about an hour using my MIDI keyboard. That was a lot of fun.

But back to the topic: I know this approach would chew up VRAM like crazy, but still: for certain genres or elements, imagine the kind of photorealistic, absolutely mind blowing looking games which could be created with digitized sprites by modern development teams, with their hundreds of members? Custom silicon could even be made to do interpolation. Instead, zero research whatsoever has been done in this area that I can find: it's a totally abandoned approach.