Imagine the convenience of a slate smartphone, either Android or an iPhone: you can toggle its suspension state instantly; it's only a few millimeters thick; it's passively cooled; it has extraordinary battery life; it has a user interface with the world's best designers behind it; it has a large, beautiful AMOLED screen. You can use it without thinking about technological idiosyncrasies.

Then take an IBM PC clone from the 90s on the other extreme, right when they introduced advanced power management for the first time: remember "plug 'n pray" and such? I remember putting a 486 "to sleep" involved taking life into your own hands. Today's x86 devices are a little better in that regard, but even then compare putting a PlayStation 5 into "rest mode" versus pressing the power button on your smartphone: the PS5 beeps, it wheezes, fans whirl up then down, and the whole process takes several seconds. Same for starting it back up again.

But you deal with the trade-offs because you need the power that a "real" computer brings to the table. Well, what if I told you that it was possible to have the full power of a "real" computer, but with all of the advantages of a smartphone or tablet? Enter: modern-day Macintoshes.

The M2 processor in this laptop is quite literally faster than the Ryzen 3600x in my current PC, and it's passively cooled. By contrast, my PC weighs probably forty pounds, and the CPU has a massive tower-style heat sink with two fans hooked to it. It sucks hundreds of watts of power under load. It doesn't have a battery, but if it did the charge wouldn't last very long. In terms of usability, this laptop is just like a smartphone: you hit a key, it comes to life instantaneously, you can sit anywhere and casually use it, the battery lasts what feels like forever, and it generates basically no heat whatsoever.

But it also has a full keyboard. Plug a mouse into it and sit at a desk: it's simultaneously a full-on desktop system, with a complete desktop operating system. It's the best of both worlds, in one device. I even got 3DO emulation set up in RetroArch, and the screen is so beautiful that it has the same "sprites look almost 3D" optical illusion that the Switch OLED's display has. 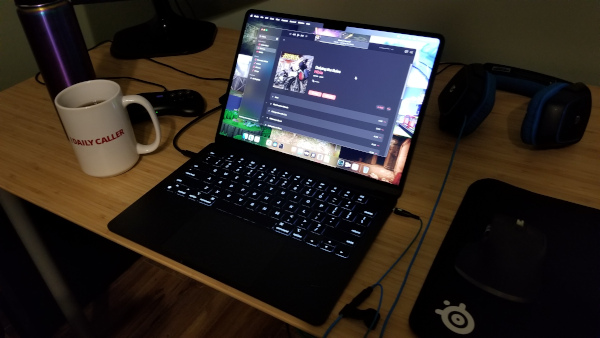 And here is the real embarrassment: I was skimming over some benchmarks and impressions, and realized that Boot Camp runs old x86 software faster and more reliably most of the time than actual modern PCs. Meanwhile, I've tried Rosetta on a couple of Intel-oriented Mac applications such as The Gimp: they run so seamlessly you don't even realize any translation layer is operating. So here the PC is dragging forty years' worth of instruction set baggage… for what exactly? Contemporary Macs are better PCs than PCs are!

I've basically lost all interest in building a new gaming PC. ARM is the future. What I'd like to see one, two, or three years down the road is for Apple to catch up to Nvidia and AMD in terms of GPU gaming performance, then release some kind of desktop— or laptop, heck— that can play triple-A games via some kind of compatibility layer. Or maybe even via a Boot Camp Windows installation. I think it will happen: Apple Silicon is only a few years old, and this M2 GPU is already capable of 3.6 teraflops— almost as fast as a PlayStation 4 Pro, in a device which weighs two pounds. Give them another couple of years, and I could see them hitting the thirty and forty teraflop level in a top-end product.

I should also compliment the security mechanisms in modern-day MacOS. Holy buckets does this thing err on the side of warning me about stuff: I'll open a file in the browser, and "hey, the browser wants access to your Documents folder, is this ok?" I'm continuously getting prompted for passwords. It's great. Social engineering aside, I bet this operating system is virtually impervious to malware. Of course, that doesn't protect you from Apple themselves: this is a proprietary operating system after all. But I find it unlikely that a company whose mantra is "privacy is a human right" is simultaneously asking its engineers to build in back doors. Anything is possible, but I doubt it.

Do I have any nitpicks with the laptop so far? Sure. I'm finding the window management paradigm in MacOS to be a little fussy early on. I discovered "Mission Control" yesterday, and it seems like that will be indispensable. I'll get used to things I'm sure. I also think they could have doubled down on the "character" aspect of things: this computer already has a lot more personality than an IBM PC, feeling like a spiritual successor to the 1980's Macs, with its Finder and Apple icons, and desktop sound effects. But they could have really doubled down on that aspect, without being tacky or annoying. But on the balance, this is the best computer I've ever used, by some margin.