The Exigent Duality
Lucky Box - 19:37 CDT, 7/09/21 (Sniper)
In the act of organizing post-move, wifey handed me a small cardboard box: "This is one of yours I think." I popped it open, and of all random things discovered that it contained a Nintendo 64! "Where the heck was this?", I enquired; "Either in our basement, or my parents'."

I unpacked the remaining articles in the box, gave them all a good scrubbing, plugged the unit in, and... 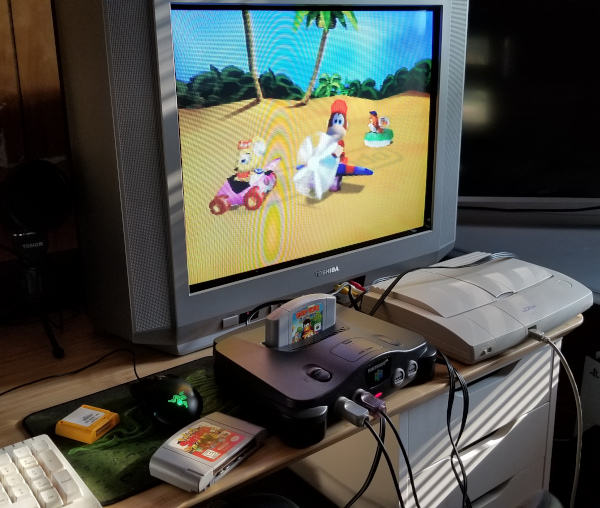 ...it works! The system itself is in pristine condition-- it looks like it's brand new, ditto for the controllers. There was also a 256k third-party memory card from some company called "Pelican", along with two games: "Pokemon Snap", and "Diddy Kong Racing." I quite literally have no idea where this thing even came from, but I'll take it.

As for the games, the former I'd already played through, with wifey just a hair over twenty years ago. The latter I'd only ever heard of, and the less said about it the better: H and I played several races in split screen, and between the slippery physics, relentless AI, grating music, and abysmal framerate-- we're talking probably 12 fps much of the time-- it gave us headaches!

The game does have some kind of "adventure" mode with save support and a hub area, so maybe I'll give it another try: "git gud". We laughed out loud at the elephant guru racial stereotype which would cause modern-day Leftist heads to explode. It's also funny how he enters the scene with, "I will help you..... good luck." Boy, he's really bending over backwards there!

Many people probably don't know that I actually owned an N64 very briefly, squeezed between the 3DO and the PSX. I got it at launch, 100%'d "Mario 64" multiple times, rented some other games, very quickly realized that the system was rubbish, sold it to Funcoland for the PSX in spring of '97, and never looked back: best move I've ever made in the hobby.

It's kind of a neat system today, in the sense that it wound up being the most powerful cartridge-based platform ever made. But it seems to me that most of its best games-- "Mario 64", the two "Turok" titles, "Goldeneye", "Doom 64", and many others-- wound up on more modern Nintendo platforms, in "Rare Replay", or elsewhere in enhanced form; as such, I'm not sure what's really worth even collecting for this thing in 2021.