The Exigent Duality
Attempted Car Repair - 20:47 CDT, 6/24/21 (Sniper)
All of the stuff needed for this project finally came in today, so I took a shot at the repair. I'm going to document a few things, just in case they are helpful to someone else in the future.

Getting the car off the ground wound up being an adventure: the clearance is so low that even my low profile jack wouldn't fit beneath it-- specifically, it wouldn't clear the front bumper assembly, or the giant plastic cover just behind.

The solution was to push the car up onto some boards, so I could fit the jack beneath. At that point, it was a simple matter of lifting the car, and putting the jack stands beneath. I put a washcloth over each one for some cushion, then very slowly lowered the car onto them. I then raised the jack flush, so that all three points-- the two stands, and the jack-- were redundant systems.

Of course, don't forget to chock the rear wheels before you do all of this. And I followed this diagram when positioning the jack stands: worked great, was very stable. 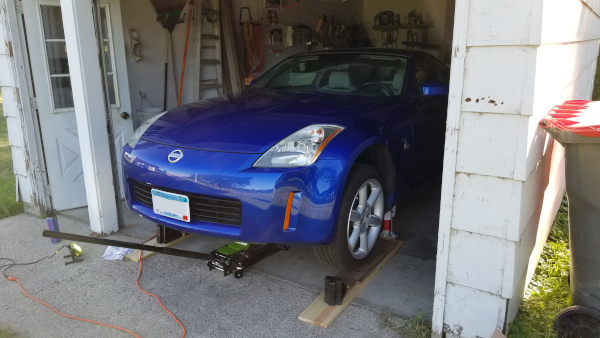 Once that was accomplished, I started exploring beneath. This particular example was built in 2002 and sold that fall as a 2003 model year. It's been through at least eleven winters, more if the previous owner drove it in the snow as well. Immediately, I started noticing some major issues.

The plastic tray-- meant to reduce drag coefficient I think? Total gimmick I wager-- was only held on by five bolts, out of a total of maybe twelve holes: the rest were all stripped, to the point where the holes were crumbled to many times their original diameters.

There is a ton of rust build-up around the wheel wells, and up by the struts. The actual frame looked ok, but this car is going to need some major suspension renovations soon.

As I kept working my way back, I very quickly came upon the spot where all of the brake fluid had flooded out of the clutch reservoir-- and sure enough, reaching my hand up past another plastic panel, I found that the clutch line had totally and completely severed off of the slave cylinder: it was quite literally a dangling hose, shredded and demolished.

I couldn't position my phone to catch the hose itself, but here is where the fluid was: 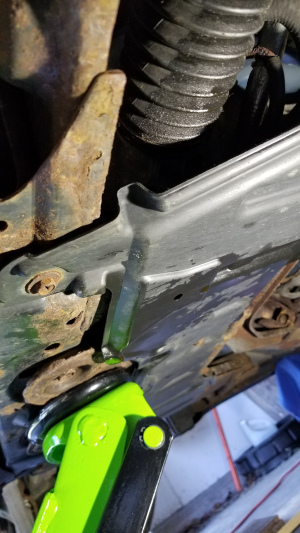 "No problem", I thought: "I'll just pull this panel off." Twenty years of rust responded: "No way, senor." Even gently hammering the wrench wouldn't budge them, and in fact I could see debris falling from the bolts themselves: they were so rusted and fused into place, that the threads were literally dissolving instead of turning in place.

And it was at that point that wifey, who had been handing me tools, stated out loud the same three things that had just become apparent in my mind as well:

Even though I couldn't do this repair myself, it was really valuable to first of all have this experience-- I feel totally confident changing oil now, or replacing brakes-- but second to have my eyes opened as to the kind of shape this car is actually in: I've been having someone else do all of the work for eleven years-- I had no idea things were this dire.

As a partial aside, I'm a little frustrated by my (now old, since I've moved) mechanic: his guy replaced my clutch four months ago-- how in the world did he not notice this clutch line situation? He was right in there bleeding it! Well, I have a theory about that.

When I'd picked up the car, my mechanic told me "Yeah, [name redacted] said this system was really tough to bleed." Well, guess what-- it's not: you can find video after video on YouTube of people bleeding these lines, and they have no issues. Which leads me to my hypothesis:

This clown replaced the clutch, but couldn't get these bolts out to bleed the line properly. Rather than report the difficulties to his boss, he twisted and contorted his hands in there, and bled the line in as ghetto of a fashion as he could manage, which is why he was having such a difficult time getting all of the air out! Then four months later, the clutch line sheared: I was lucky the clutch died when it did, and not on the highway where it could have resulted in an accident.

My lesson in all of this is that I need to take more ownership of my cars: even if I get a brand new 400z or whatever it's called, I am going to put that car on jack stands and inspect every last bit of work going into it-- even warranty service. It's long overdue that I got more "handy" like this.

In any event, I'm going to get this thing towed into town in the next couple of weeks, and see if they can get it back on the road for me. Then I'll make some kind of decision about what to do next.