The Exigent Duality
Subaru Forester - 13:49 CDT, 5/25/21 (Sniper)
While this undoubtedly is one of Inzaghi's biggest shortcomings, to me it's not the "killer issue", since the fact is our Primavera squad is simply not very good: even Raul Moro, in the bit I've spent watching him, doesn't look first-term ready from a tactical or maturity standpoint; the Pedro Neto comparison doesn't seem quite right to me, as Neto was and is undoubtedly much more talented. Perhaps-- hopefully even-- I will be proven wrong next season, should Moro and others get more playing time.

For me, the fatal flaw with Inzaghi is that every single Serie A coach has known for about a year and a half how to shut down Inzaghi's system: employ a deep line forcing Lazio to play in front of you, don't turn the ball over in the middle third, and limit Luis Alberto's ability to face goal. I've been waiting that entire period for Inzaghi to adapt-- to come up with a "Plan B"-- and it has just not happened. It makes me question his intelligence, frankly: how many times can someone lose a chess match in the exact same way, and not pick up on how it's happening? Either that or Inzaghi is absurdly stubborn: "My system will come through in the end, you just wait!"

Yes, Tare is the primary fault behind this team's struggles: Inzaghi is a borderline miracle worker getting any kind of success out of many of these players. But the latter's complete lack of ability to adapt tactically over such a vast chasm of time is a critical problem: if this were a murder trial, it would be the damning piece of evidence.

On to a totally different topic, I drove my mother-in-law's "still new car smell" Subaru Forester between the two houses over this past weekend, and as I'm apt to do anytime I drive a new car, I jotted down a few notes. But first, a disclaimer: I am super grateful that she borrowed me her car, and indeed its interior space with back seats folded down is one of the car's major strengths: in that transformed state, it's very nearly like a small pickup bed with a topper. Additionally, while she likes the car on the balance, everything I'm about to write below are also things she dislikes about the model-- so I'm not ungratefully slagging off her beloved vehicle, or anything along those lines.

Let the positives come first-- as mentioned above, the car's interior storage space is very useful. The seats are also very comfortable, with reasonable visibility as well. Aesthetically, for being copy-and-pasted "Cute Ute Number 4672" on the market, it's probably the best looking one I've seen: funky tail lights aside, it eschews the bizarre and off-putting, very angular "whoops the designer's hand slipped on the easel", "Transformers" look of most contemporary vehicles, and instead adopts curves married to just enough of the trademark Subaru utilitarian "ugliness" to be pleasant on the eye. This particular color catches the sunlight in a really pretty way too. 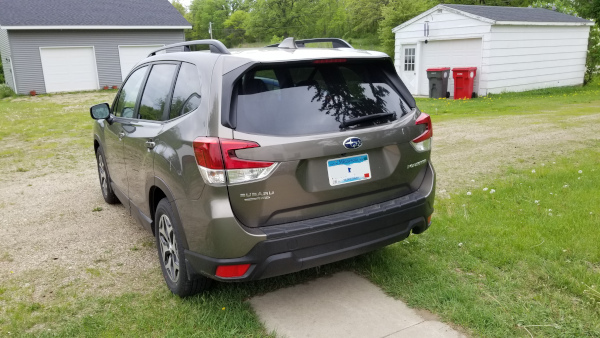 Power-wise, the Subaru hallmark 2.5 liter boxer engine, putting out about one hundred and eighty brake horse power in this implementation, did a good job during my drive of letting me merge onto the freeway comfortably and even execute a couple of passing maneuvers, while hauling probably two hundred pounds of boxes and furniture. The transmission is the first CVT I've driven which didn't require me to adorn a barf bag, as it artificially mimicked the fixed gear ratios of a conventional automatic. I'm not sure if this was a toggleable setting or not-- it's merely how the car was behaving during my drive. It's about the slowest responding transmission I've ever experienced as well-- so bear that in mind.

In terms of handling... there isn't any: the body lean is immense for a, let's say, post-1990 car, and the OEM tires only contributed to the very poor response time on steering inputs, as the car wallowed when slung around a wide looping corner. The flip-side of this is that the car is very comfortable over bumps, which in this class is really what matters. While no one buys a car of this type for athletic cornering to be sure, I suspect the handling is worse-than-average in class, which is the only reason I mentioned it at all.

Gas mileage seemed good for a vehicle of this girth: I got nearly thirty miles per gallon on the essentially all-highway commute according to the car's trip computer-- good enough for me. It also runs on regular unleaded, which is a nice bonus. Another benefit is that the base model of this car can be had, brand new, for about $25k; I haven't extensively comparison shopped in the class, but off the cuff this seems like a very reasonable price given how expensive cars are these days.

But now to the negatives. Let's start by taking a look at the steering column: 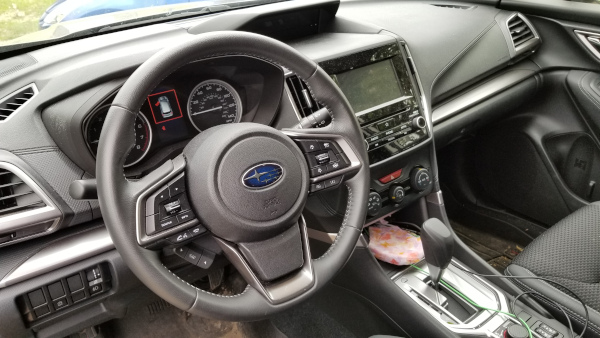 That's thirty five operations, and we haven't even gotten to the heating and air conditioning knobs yet, much less the touchscreen which runs "apps", sort of like an integrated iPhone. I didn't even open that Pandora's Box, and just pretended it wasn't there. Whatever happened to a car being designed for driving versus endless tinkering?

It would be one thing if all of this complexity could simply be ignored-- but it can't: my mother-in-law had to quite literally walk me through a pre-drive checklist of all the things which need to be disabled, using these wide varieties of knobs and dials: "first you need to shut off 'ASS' so the engine doesn't die at every stoplight; then you need to shut off the thing which automatically swerves you into concrete barriers sometimes; after that, don't forget to disable the thing which automatically slams on the brakes if it thinks you're too close to another car."

And these are supposed to be safety features!

I found out the hard way that I'd missed the latter-most button-- which needs to be held down incidentally, as if the car's designers only reluctantly let you shut it off at all: at one point I executed an overtake-- yes, those are required in America due to all of the horrendous lane discipline on display-- and the car brake checked the vehicle I was overtaking, because it deemed that I'd gotten just that bit too close to the vehicle ahead of me in my exiting lane. Caught completely unawares, it took me a few seconds of being dazed, my heart racing, to figure out what the hell had just happened.

On that note, if you get "too close" to another car, the display console shows a giant flashing red circle and starts buzzing at you. On top of it, there is a large animated "fuel economy" section right at the bottom of your field of vision, constantly changing the entire time you're driving-- causing you to continuously battle the urge to take your eyes off the road to see what the car is heckling you about now! Heck, the vehicle even lectured me to check the back seats when I'd turned off the ignition!

Even something as basic as cruise control-- you know, a technology from the 1970s-- has been rendered useless: it changes your speed depending on the next car forward in your lane! Doesn't that defeat the whole purpose of the function? One time I flipped "cruise control" on as a car was getting out of my way, like I've done ten thousand times in dozens of other cars, and the Forester slammed on the brakes, nearly giving me a heart attack, as I'd enabled the function a split-second too soon before the lane-changing car had completely gotten out of my way.

Every time the "cruise" control flipped between constant speed and "I'm going to change the speed all the time" modes, the car emitted an audible beep. I lost track of the number of times the Forester buzzed and beeped at me, all told. I wonder if this "adaptive cruise control" is why the lane discipline issues seem to be getting worse-- people just sit in the passing lane in a line, drooling on themselves like unthinking meatsacks, with their cars driving themselves?

When you put the whole Subaru Forester package together, I never felt like I was in control of the car: rather, it felt like flying one of the giant airliners in "Flight Simulator 2020", where you just sort of guide the craft towards the destination, with the autopilot handling most functions. But unlike an airplane in the vastness of the three-dimensional sky, a car operates on two dimensions, and is doing seventy miles per hour within mere meters of other four thousand pound pieces of motorized steel, glass, and plastic.

During the whole experience I felt like I was wrestling for control of the car, from the car itself. The vehicle was doing absolutely everything possible to distract, nag, harrass, and otherwise divert my attention away from actually driving.

I'm a driver who is never phased by anything: I've driven through raging snowstorms in my rear-wheel drive 350z, picked my way through near-zero visibility darkness, and even done some amateur motorsports, all without breaking a sweat. But this single trip in the Subaru Forester was non-stop white knuckling the whole way, my heart jumping at every beep and buzz, or every time the display readout changed, as I was flat-out praying I'd get to my destination in one piece.

Can you imagine if I'd had all of the "safety features" enabled? I can't, and don't want to either. It's no wonder some people are clamoring for "self driving" cars-- because "driving" a modern car yourself is so complicated, mentally taxing, and scary!

It was a huge relief after that and on arrival to hop into my own car, with its giant tach, manual transmission, actual cruise control, and nothing else-- and just drive. I am more curious than ever now to test drive some of these incoming Japanese sports cars, including the new "Z", to see where on the spectrum they fall between this Subaru Forester, and my current vehicle.