The Exigent Duality
Superga Redux - 20:17 CST, 9/06/20 (Sniper)
Being the Italian football fan that I am, I decided to fly the exact flight plan Pierluigi Meroni followed, which ended in the terrible "Superga air disaster"-- still piognant, even sixty nine years after it happened.

Before I get into all of the details, you too can trace the path by downloading the following two files, and opening the ".pln" file in the game's flight planner; I've done all of the work for you:


The ill-fated "Grande Torino" transport was a "Fiat G.212CP"-- one of the strangest looking aircraft I've ever seen, having a third engine mounted to its long snout. The closest equivalent in Flight Simulator is the "Beechcraft King Air 350i".

The Beechcraft is quite a bit smaller than the ill-fated Fiat G212CP used that day-- 47 feet long versus 75-- and a heck of a lot lighter-- 15k pounds fully-loaded versus a whopping 38k!

However, they are both piston-engined passenger planes with nearly identical ranges-- 1550 nautical miles versus 1621-- and powerful Pratt & Whitney engines: close enough for me. 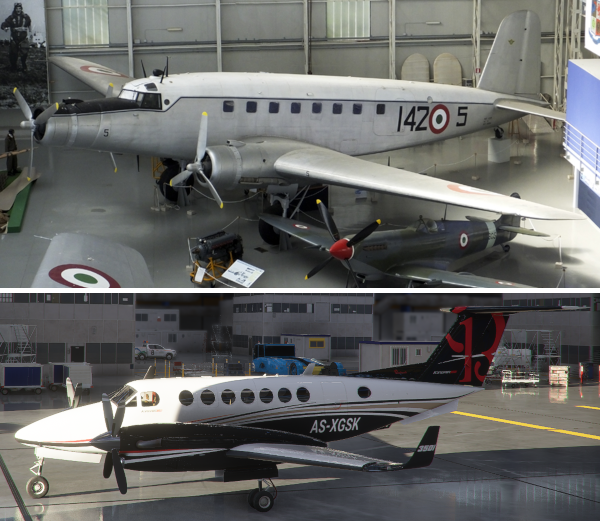 They took off from Lisbon Airport, flew to Barcelona presumably to re-fuel and stretch the legs for a few moments, before embarking on the final leg, eventually arriving-- or not, sadly-- at their final destination: Turin-Aeritalia Airport. 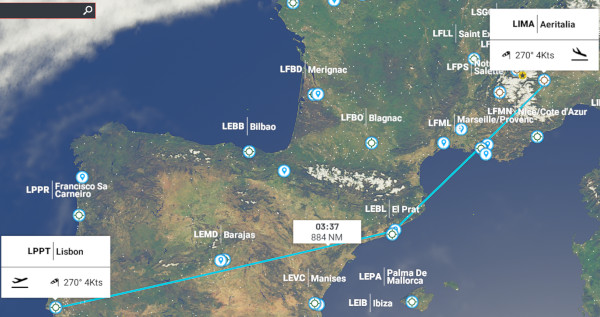 I hacked some custom waypoints into the above-linked plan and flight files, with the exact GPS coordinates of a few points of interest.

The left-most picture below depicts the present-day "Estádio da Luz" stadium, which is near to where Torino and Benfica played their testimonal match that day: it's practically down the street from the airport.

It's worth noting that 1940s era stadium was demolished way back in the 1950s-- I didn't even bother with an in-game screenshot of the spot, since it's apparently a freeway now! But you can find pictures of it online, before it was demolished.

The middle picture shows the "Camp Nou", which I did snap a pic of as I flew over just for fun-- one of many screenshots you'll find below. The right-most picture shows, of course, the fateful hill where the team found their demise.

One thing I really want to get across with some of these screenshots is just how long and arduous of a flight this was for the pilot. Being a parent, I got interrupted several times and had to pause the game-- but the unpaused flying time alone was hours.

This accident is frequently blamed on a theorized faulty altimeter. But after having made the trip myself, I have a different hypothesis: evidently it was late evening when the Fiat plowed into the hillside-- this could have been a straight-up case of pilot fatigue!

Remember: planes back then had only rudimentary "autopilot" systems, which could maintain a heading-- and that was about it. No altitude automation at all. So this dude was managing throttle and elevator trim, not to mention manual waypoint navigation, for hours and hours on end.

He arrived in Turin to complete fog coverage, and a lashing rainstorm: think how easy it would be to misread an altimeter at a glance in the inconsistent cockpit lighting of a now-ancient 1940s craft like that? The guy wasn't a robot: he was a flesh and blood human.

But back to the journey: it starts by flying over beautiful rolling countryside. There are tons of these little villages, centered among the farms: 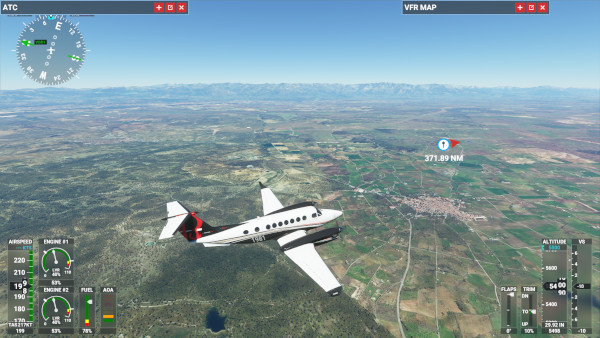 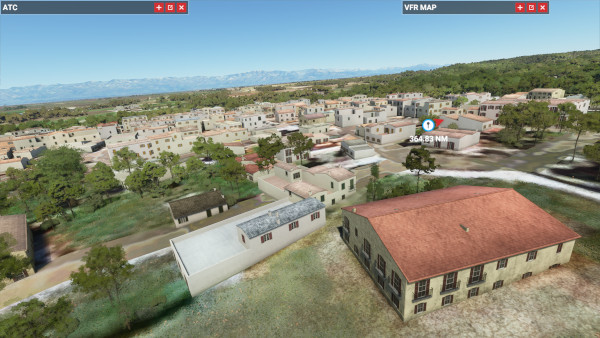 This goes on for a few hundred nautical miles-- at which point Barcelona and the aforementioned "Camp Nou" is reached. It was here that I landed to re-fuel my plane: 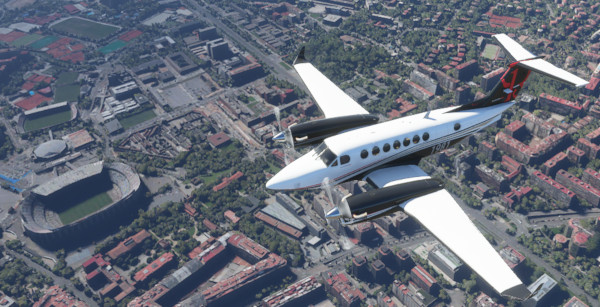 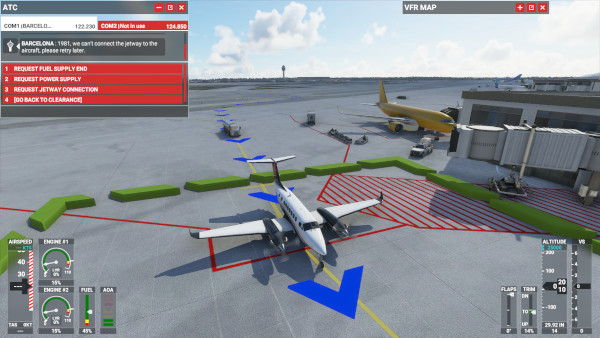 I took off again, and flew yet hundred and hundreds of more nautical miles, this time over increasingly mountainous looking terrain. Notice how Flight Simulator's one hundred percent organic weather systems even realistically generates fog in the mountainous recesses: 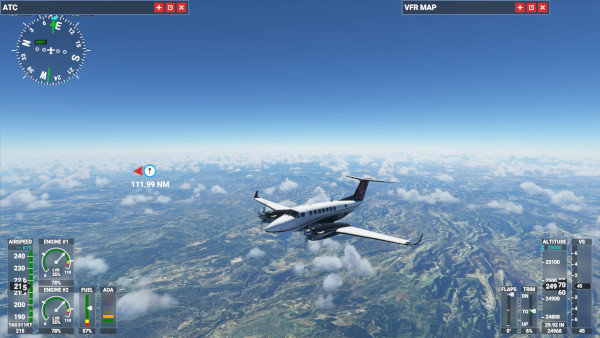 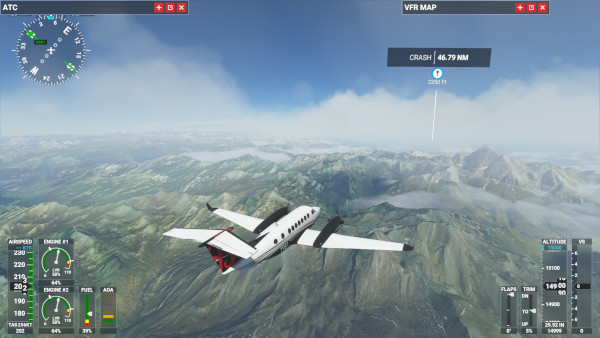 Finally, the Turin area is reached, and I achieved my custom "Basilica of Superga" waypoint. To my disappointment, Flight Simulator couldn't figure out that this satellite splotch was a building-- so it didn't try to construct a 3d version. Bummer!

All the same, I was absolutely thunderstruck as I approached the spot of doom, at just how close the poor pilot was to getting home in one piece: the airport is quite literally right over the hill from where he'd crashed! Here he'd flown over half of Western Europe only to fall at the final hurdle, mere minutes away from the trip's endpoint.

Here is the Basilica: 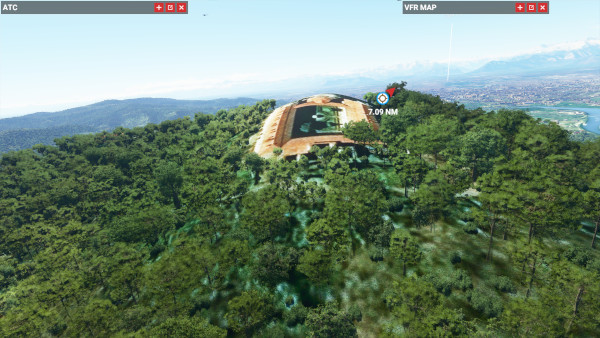 Having found the Basilica, I had to circle around a bit to get just the right shot to represent the accident itself-- and I did.

You see, he crashed into the hill from the exact opposite direction in which my plane is facing in the next shot. In other words, turn my plane around, and point it right at middle of the base of the orange: that's the exact spot he hit, from this exact angle according to my review of Google "Street View" data.

Of course, he didn't dive into it-- he flew directly into it. Hopefully this gives you a perfect display of just how astonishingly low he was: we're talking "grazing tree tops". It's so low I couldn't even attempt it in-game with crashing myself.

And see that waypoint just off to the right? That's the pattern entry for the airport :( 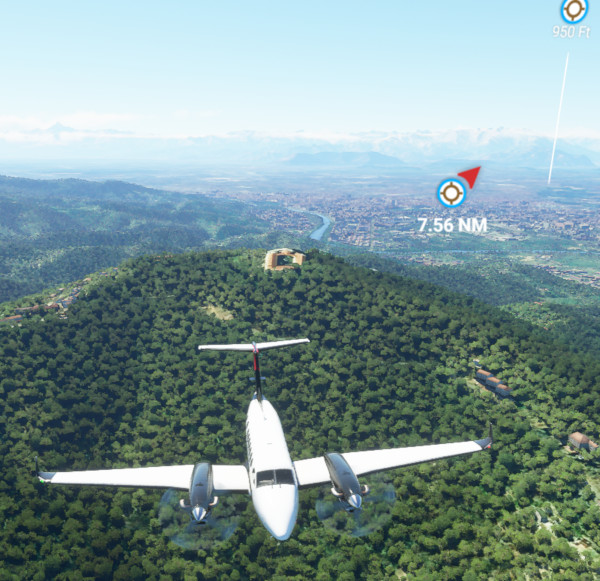 Unlike pilot Pierluigi Meroni and the Valentino Mazzola-led "Grande Torino" team, I completed my flight: here I am on final approach to Turin-Aeritalia Airport-- a tiny, one-strip affair surrounded by grass and a couple of small structures. Judging by the appearance of the place, I wouldn't be surprised if it looks more or less identical today as it did then.

Landing and parking my plane there after the long journey felt bittersweet. 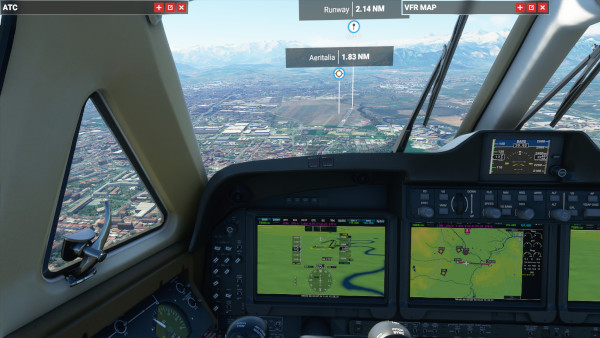 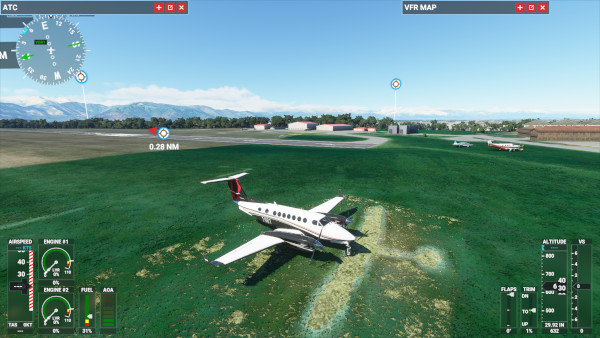