The Exigent Duality
Endless Horizon - 14:56 CST, 8/28/20 (Sniper)
The kids and I have been playing a lot of the new "Microsoft Flight Simulator", which is the latest in a series I've been enjoying since version 3.0, running on my grandfather's DOS PC in the 80's.

I've been writing for many months now about how this was shaping up to be the most ambitious piece of software I'd seen since the 90's, and it's managed to meet every last one of my sky-high predictions. It's one of those nearly unheard of contemporary video games which is both deep and accessible, blurring the line between "simulation" and "arcade" to the point that it's just a smudge. What's more, it has an attractive aesthetic, and cutting-edge graphics.

One of its coolest features is that not only are the interiors of the planes fully-modeled, but every single button, switch, and lever can be interacted with via the mouse. A full checklist system even walks you through how to start your entire plane, from a cold park. The developers explain that they are in fact emulating the systems, including the Garmin satnav software itself, which is why all of it feels so realistic-- because it is. 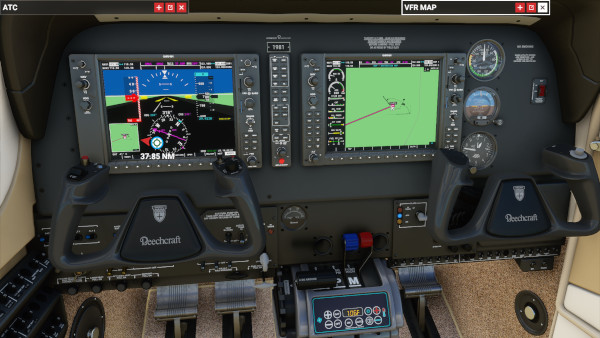 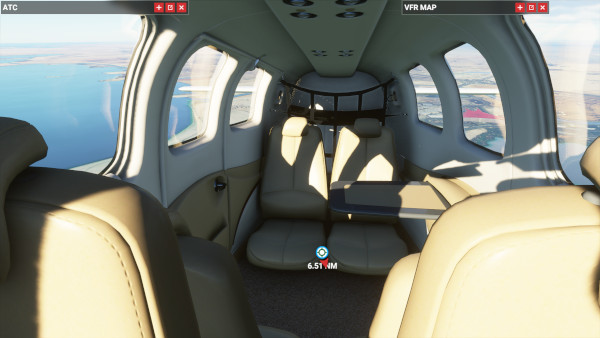 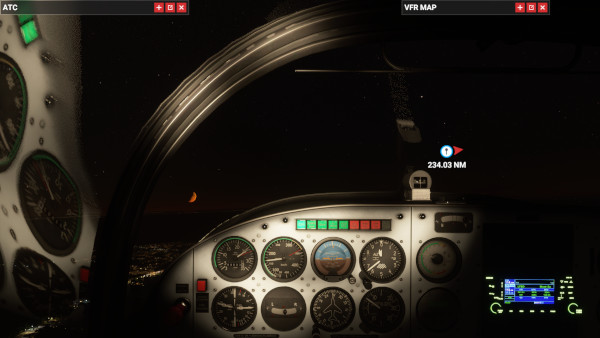 In my screenshots, you probably will notice the "ATC" and "VFR MAP" bars along the top of the screen. Those are actually windows, which can be expanded, resized, closed, and moved around. There are about twelve or so different ones you can open, and the game remembers your screen layout.

A huge part of the fun in this game involves the fact that it models the entire planet, via a combination of satellite imagery, Bing Maps metadata, and the occasional custom-curated, artist-modeled building. You can "pause" your plane in mid-flight, then use the "drone" camera, which operates exactly like a free-roaming photo mode.

Before you fly, you create a flight plan by spinning and zooming around a full globe view of Earth, then clicking on icons to configure your route. One of the first flights D and I did was from the local airport, to a fly-over of the Murderapolis home, to a fly-over of the Bugout house, to a landing at the municipal airport near that home.

As of now, you can't place random, custom waypoints on the globe. So what I did was look up the exact GPS locations of both of our houses via Google Maps, then manually edited the ".flt" and ".pln" plain text files for our flight to copy-and-paste the two custom waypoints in. It's a little hackish, but it still only took ten minutes.

We used the "drone" camera to look at the houses up close, and they are hilarious: the Murderapolis home has a huge dent in it, probably where a shadow was in the satellite picture, while the game interpreted the Bugout house as single story, with the garage being converted into what looks like an outhouse with Dish Network, and the chicken coop as its own house, complete with attached garage! Maybe there are some secret our chickens aren't sharing with us... even a nearby grocery store resulted in hilarity.

We also buzzed the cars on the major interstate freeway on the way there-- felt positively surreal. D also took a shot of the Mississippi at ground-level: it looks like a photograph! 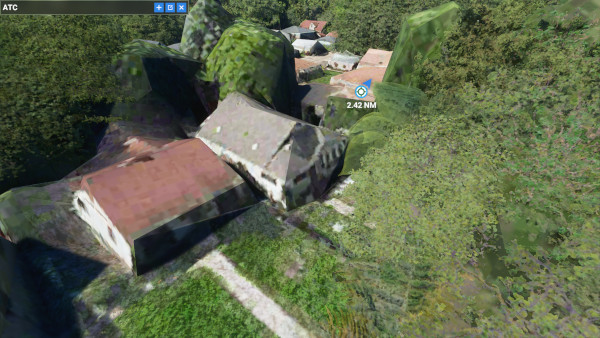 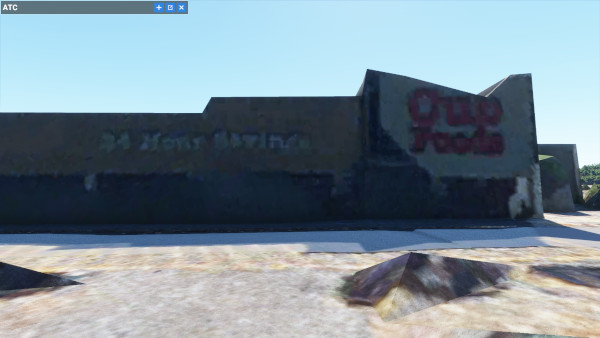 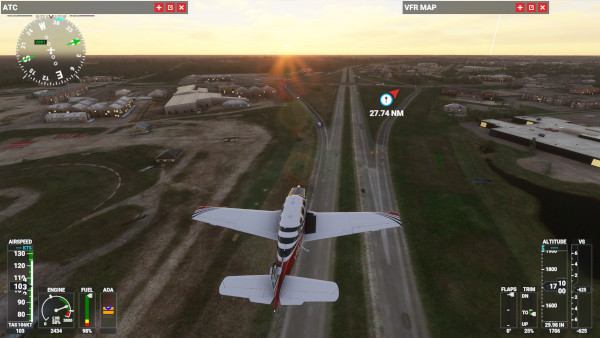 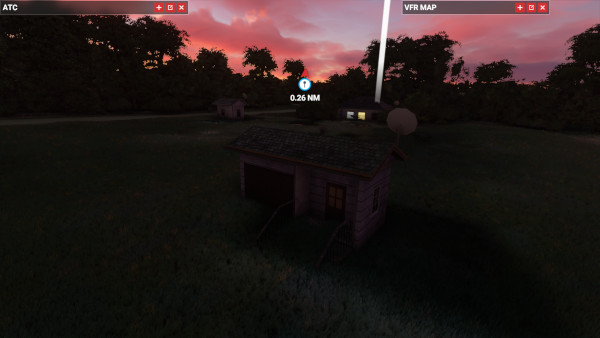 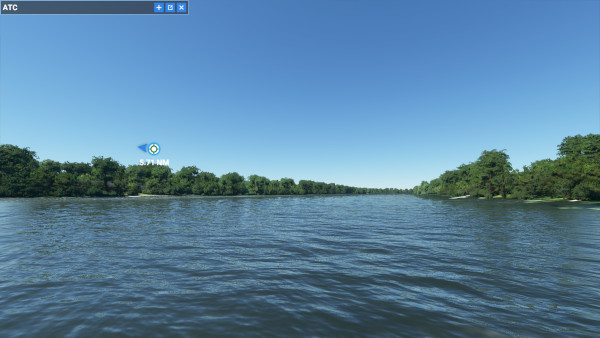 This game crosses the line between the real and the fake like nothing I've ever experienced. My mom was watching me play it this past weekend, and we quite literally had a conversation about what the game was doing "for real", and what was phony: it took fifteen minutes of actual explanation, questions, and clarification:

The other planes you see in the game are actual flights, happening in real-time; the weather and time of day is real-time; the radio chatter isn't actually streaming over the internet, but is actually occurring in real life, right around the same moments; obviously you can't see someone in real life walking around-- there isn't a "magic global camera" or something-- but the buildings are all constructed on the fly by actual photographs and other real-life data.

One player stated online that he thought the in-game weather was broken: "it's not raining in real life by my house." Then he looked out the window, and it really had started raining, while he'd been not paying attention. I had a similar experience: I was following an airliner flight, and could hear the real life plane going over my house, right as it flew over my home in the game. It's mind-melting, even for someone as technical as me.

Apparently they're working on VR headset support. I'm not sure my brain could support that added layer, on top of what's already there.

Back to airliners, you could do full-on airline captain simulation, as the airports even let you call in ground services like catering, baggage, electricity, and re-fueling. There's no metagame way to "buy and sell goods", so-to-speak, but you could make-believe and have just as much fun, hopping to and from airports, running your own pretend airline. 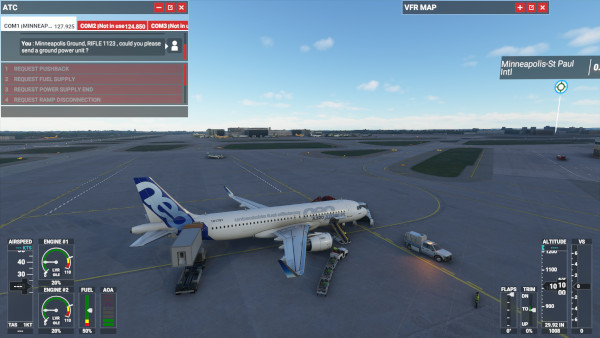 One of the best parts of all flight simulators, but especially this one, is sight-seeing. I flew into the mountains to Yosemite, and got a neat picture of me flying over some wildlife. 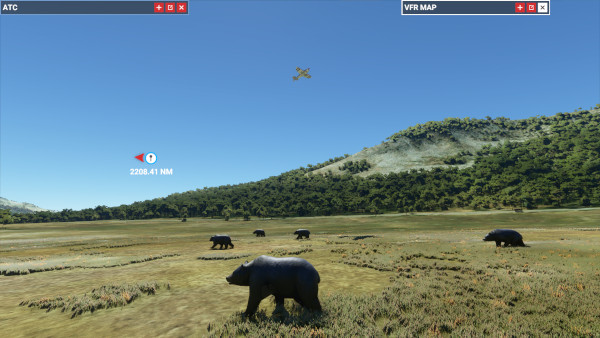 D is an aspiring architect, and dreams of building something like the Burj Khalifa. Maybe I'll do a whole blog post about just the Dubai area, because it's pretty special. But for now, I did take a screenshot of me buzzing a cruise ship. I also recorded a video of a runway surface which the game failed to properly generate. 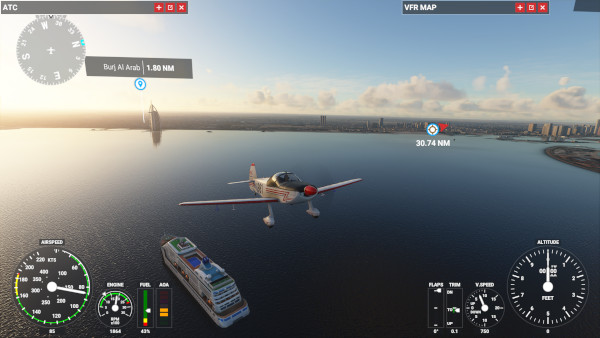 D and I flew over the pyramids at Giza, in co-op. 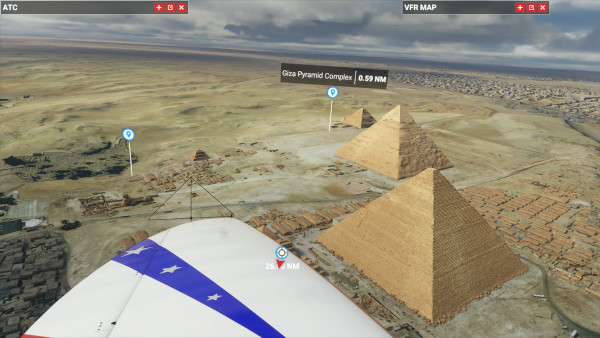 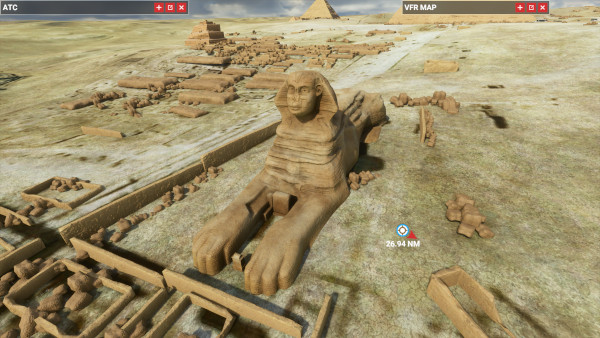 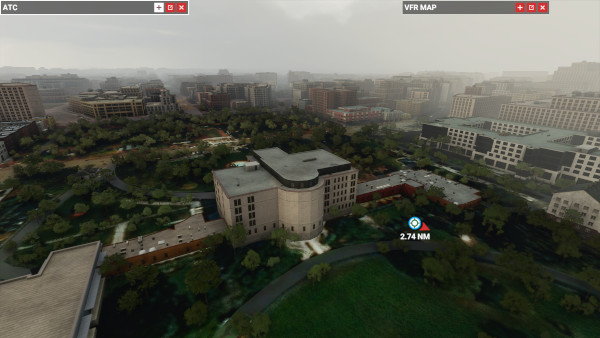 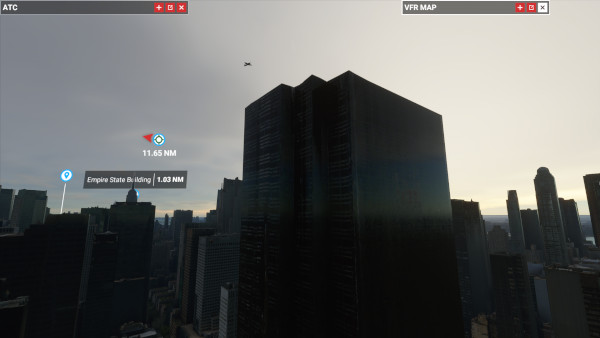 The Lincoln Monument was however: part of what I love about this game is that, like games from the 70's-90's, there are tons of unintentionally funny moments-- if you fly the "drone" camera into the monument, you get an overly-sharpened JPEG Abraham Lincoln, who looks like he's a Star Trek villain on some planet, ready to shoot lasers out of his eyes at the away party!

Also take a look at the dorky pilots. Twins?! 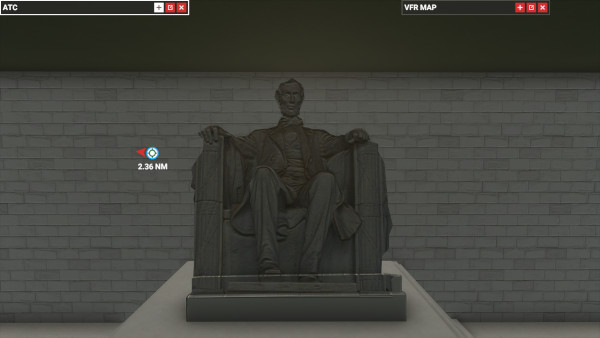 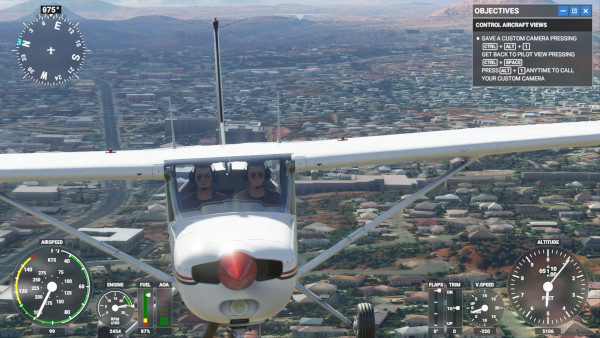 Finally, the game also fully-models sunrises plus sunsets, with layers of clouds making shadows on themselves. Not only that, but actual humidity and individual gusts of winds organically form clouds, just like how weather systems function in real life. There was a thunderstorm over my house today-- so I hopped into the game, and... 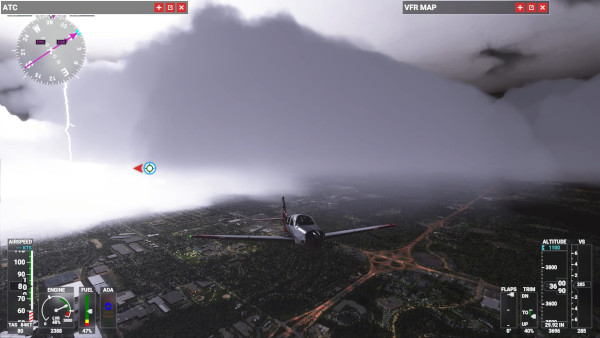 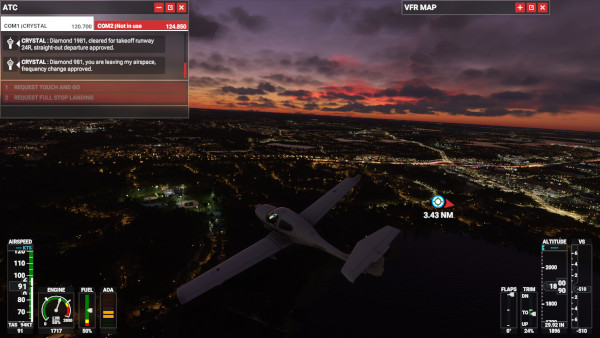 The game has a lot of planes to choose from. I've read that they have varying levels "TLC", with the "Cessna 152" flying astonishingly close to the real thing according to real-life owners of that plane. The game has a Forza Motorsport-style "garage", where you can rotate around the plane at every possible angle, as it's parked in a giant, extremely detailed hangar.

For long-distance flights, my primary plane has been the "Beechcraft Bonanza G36": it has adequate power and a modern-day autopilot plus satnav system, besides its back seats and table make it fun to roleplay with-- I can "bring" the whole family with me!

For short distances, I adore the characteristics of the "Robin CAP10". It feels like the airplane equivalent of my real-life "Nissan 350z" car: powerful, raw, low-tech, and maneuverable. In fact, the "CAP10" feels a lot like a miniature version of the World War II aircraft I grew up with in games like "Aces of the Pacific", from doing aileron rolls and Immelmanns, right down to weaving on the taxiways so you can see where you're going.

Incidentally, Asobo could make one mean follow-up to the old "Microsoft Combat Flight Simulator", if they so chose. Maybe an idea for the future...

Airplanes seem to be following some other trends from the automobile industry: for example, the "Diamond DA40" is a diesel-powered plane that's supposed to be "eco-friendly": I found that it was not only ugly, but could barely climb out of its own way. Then you have the "Icon A5", with a totally pretentious cockpit which looks like the inside of a Tesla-- although to be fair, the plane as a product looks pretty sweet.

The next aircraft I'm going to learn is the "Cessna Citation CJ4", which looks like the "Learjet"-equivalent from the older games in the series: specifically, I'd love to fly in it from South Korea to Japan, or even something crazy such as from South Africa to Bolivia.

Needless to say, this is a game the kids and I will be playing for several years, especially as the company undoubtedly adds all manner of new content, such as new planes and probably even a full-on "Forza Motorsport"-style livery editor, for which the "Liveries" hook is already present in the menus (but which only ever has one selection available).