The Exigent Duality
Not Inclusive - 14:27 CDT, 7/21/20 (Sniper)
Here is an example of what people are being subjected to at work on an almost daily basis, in large corporations: 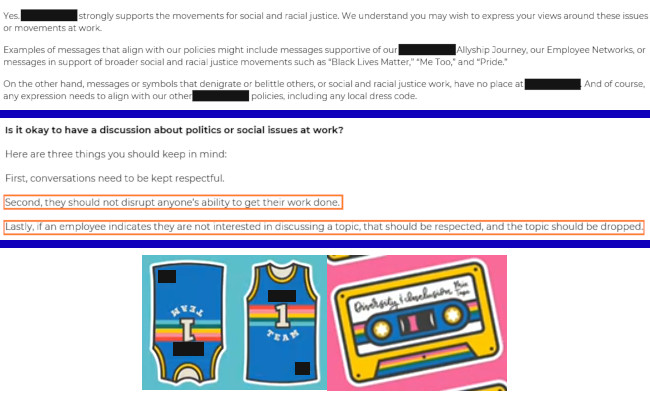 All three images are screenshots I took from work, just today. I redacted any references to the company name, of course.

As for the second, my employer's CEO-- so, right from the top-- has been subjecting his tens of thousands of employees to political video diatribes, posted above the fold on the intranet site. Did he ask each employee if they were interested in the topic? Doesn't he think that his videos might be a distraction, taking up brain cycles for even people who agree with him, much less disagree? As an employee, how do I tell him that I'm not interested in the topic, and that he should drop it?

As for the bottom-most pair of images, those were being used as backgrounds during a division-wide meeting, by the senior-most leaders of that division. Meanwhile, they were asking-- in a call with one hundred and eight people, where they had these rainbow backgrounds and even brought in a "guest speaker" to talk about George Floyd-- whether our brands should have political messaging. Given the setting, who in their right mind would un-mute their microphone, and say even something mild like the brands should be apolitical? Potential career-ending move.

My co-workers are good people: they are smart and I enjoy working with them. I think the company does a lot of great work, both in the market place and through charity, which is why I've been there for fifteen years. But like most Leftists, this same vocal minority of employees has very low levels of self-awareness, and a lot of obvious-to-me double standards, about the impact of political speech in the workplace, and how that creates a hostile unwelcoming environment for maybe as many as half of the company's employees. Sadly, they are caught in a monoculture vortex of groupthink, so they haven't yet been able to see it that way.

What's more, they haven't thought this political messaging through: if someone is at the store and my company's product has a "Black Lives Matter" logo on it, half of the people in the country would put it back on the shelf in disgust: "they burnt half my city down, are tearing down statues, and are doxing and attacking anyone who disagrees with them-- but now I have a multi-billion dollar corporation setting me straight about BLM, thank goodness!" It's not going to change anyone's minds: only alienate potential customers.

I bring this up because it's happening all across corporate America, not just at my company-- yet when I tell people who aren't in those environments, they often don't believe me, or think I'm exaggerating. So, here is a concrete example.