The Exigent Duality
Diseased - 09:10 CST, 4/09/20 (Sniper)
Mysophobia: a pathological fear of contamination and germs. People who suffer from it exhibit: excessive hand washing; an avoidance of locations that might contain a high presence of germs; a fear of physical contact, especially with strangers; excessive effort dedicated to cleaning and sanitizing one's environment; and a fear of becoming ill.

There are many underlying factors and reasons that a person may develop mysophobia, such as anxiety, depression, or a traumatic situation. Developing in a culture where hygiene is heavily integrated into society (use of hand sanitizers, toilet seat covers, and antibacterial wipes for commonly used items such as grocery carts), can also be a main driving force for the development of mysophobia. 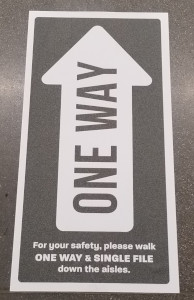 No, the above picture is not a fake satirical piece: it's a photo I took from my weekly grocery shopping trip, which I performed just this morning. These are actual stickers, stuck to the flooring in every aisle, literally telling people which way to walk-- in a grocery store: "for your saaaaaafety."

Safety! While walking down the Ragu aisle!

Unfortunately, this writer is particularly prone to OCD-- so I know first-hand all of the hallmark signs of someone suffering from this kind of mental health issue. We are now living in a society where me having my worst OCD day ever, times a factor of ten, is now normalized. As bad as I've been at times, I've never put stickers on the floor of my house telling me from which direction to approach the toilet.

If I sent a family member to a psychologist and explained that this family member refused to leave the house without a mask on their face, wouldn't get within six feet of other people, and was putting stickers on the floor telling them which way to go around the coffee table, this person would be institutionalized as a danger to either self-harm, or hurt someone else.

Instead, all of those actions are considered to be sane, and even wise! Even enforcable at gun-point, if you take many American governors at their word! People having a pathological fear of catching what is essentially the flu-- exhibiting the worst characteristics of a sufferer of mysophobia, on their worst-ever day-- is mainstream. Wake me up when this dream is over, please.

It's just like how the tiny percentage of people who are sadly suffering from gender dysphoria are put up in front as being healthy; or how people who suffer from an excessive need for mommy and daddy-like authority figures to comfort and control them are normalized in the body of politics, and the government-centric organization of our society.

By contrast, anyone who points out these mental illnesses is considered to be crazy themselves-- or a "conspiracy theorist", or a Nazi, or a *insert-word*-aphobe. Up is down, left is right, two-plus-two equals five.

We are, no exaggeration, living in a world where the inmates are running the asylum.