The Exigent Duality
Little Dragon King - 20:55 CST, 8/23/19 (Sniper)
Remember less than a month ago when I lamented the fact that there was no modern-day equivalent of something like the Game Boy Advance-- a tiny, light-weight, cheap handheld that could easily fit in your pocket? Turns out, I wasn't looking hard enough. Behold the yellow wonder, right next to the aforementioned Nintendo classic incidentally! 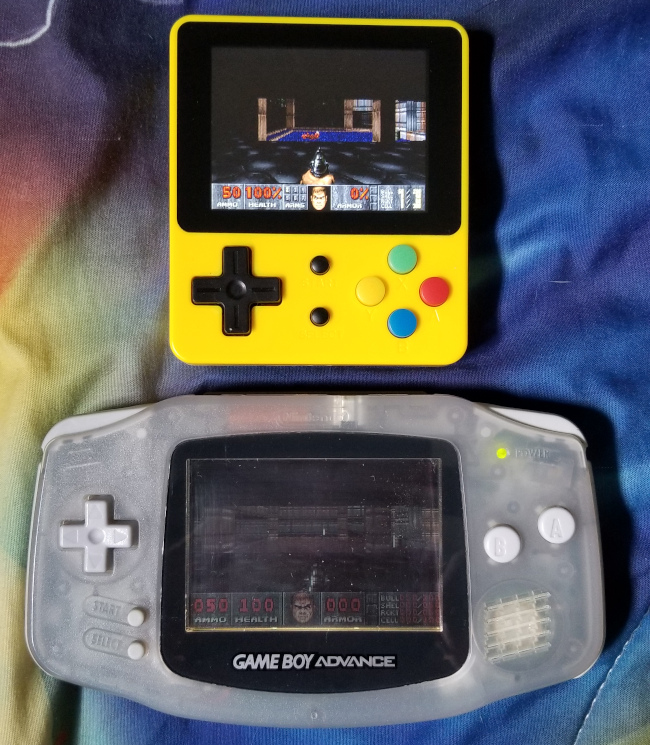 As I've discovered over the past few weeks, 2018 saw a renaissance in the area of "open source" portables. Why? Because the Chinese got interested. And being in that part of the world, the Chinese have cheap, easy access to mass-bulk acquisition of MIPS knock-off system-on-chip designs, including the Bejing-made "Ingenic JZ4760" powering this tiny device.

To be clear, this is not a fast chip: it's a nearly decade-old design, and it's hilariously built on a 130 nm process. To put that in perspective, some of Intel's Pentium III variants were also 130 nm-manufactured chips! Nonetheless, this plucky bugger has pretty decent battery life so far as I can tell, and doesn't generate much heat. It's also paired with 128 megabytes of DDR2, which is plenty for this sort of thing.

Just don't expect Dreamcast emulation-- or even 32X, truth-be-told: it's a PC Engine SuperCD or SegaCD-and-prior platform. And that's just fine: most of the best video games ever made came out before 1994 anyway. Although, the Game Boy Advance emulation is pretty speedy, and that's a turn-of-the-millenium 32-bit system-- so there is that! 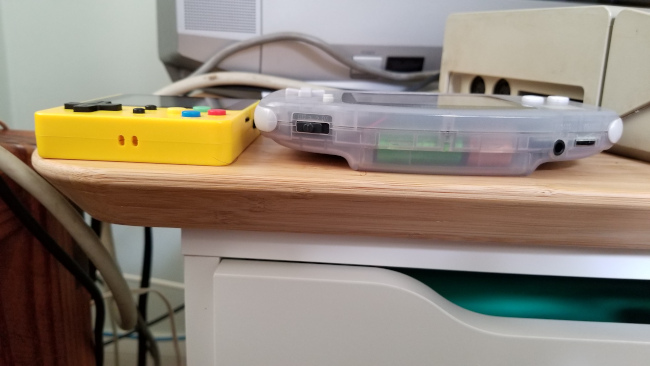 I've read that these Chinese firms are able to acquire chips like these for less than 5 USD per unit, and the screens for little more. Fab some cheap plastic housing, and sell the thing to wealthy Americans abroad for dirt cheap: the LDK goes for 55 USD, while some competitors such as the "Bittboy PocketGo" are available for as low as 35 USD-- and that price includes trans-Pacific shipping if you buy from a store like RetroMiMi!

On the software side, the little yellow wonder runs an obscure, extremely light-weight GNU/Linux distribution called "OpenDingux". Like all GNU operating system variants, the whole thing runs on total transparency: nothing more than shell scripts and simple utilities. Check out the initialization script, and one of the application launchers. And who said software couldn't be self-documenting? 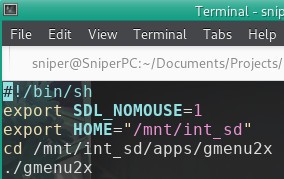 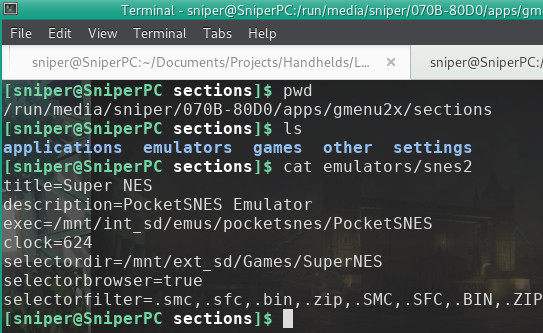 Those screenshots were taken from my PC. But I could practically have taken them from the system itself! Yes, this is a terminal emulator on the actual system, plus a full-fledged file manager. It doesn't get much cooler than this. Check out that kernel version-- 2.6! Brings back those halcyon memories of 2005, when Torvalds was still an asshole-- thems were the golden days! 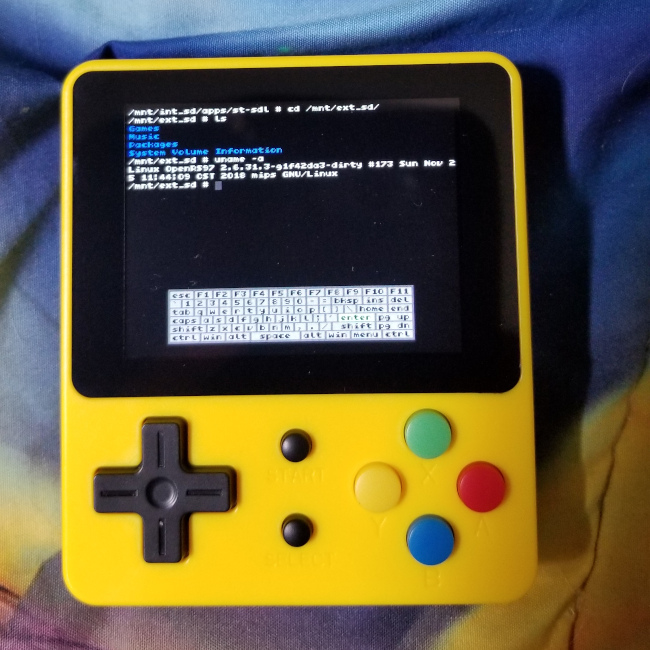 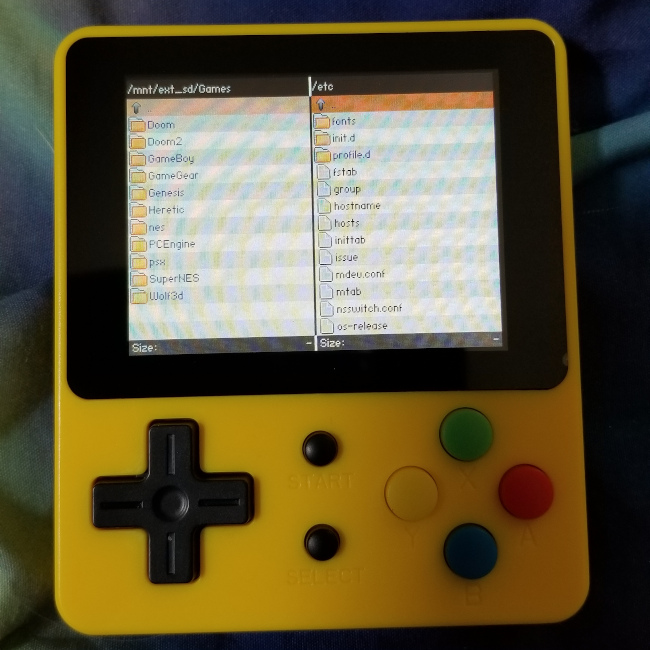 The system has two SD card slots: one beneath the battery, and one on the unit's side. The internally-slotted one is clearly intended to contain the primary, system-oriented partitions, while the external one is meant for user-space data. It doesn't have to be that way though, since the operating system and supporting tool chain is quite customizable, even outside of needing to compile anything: 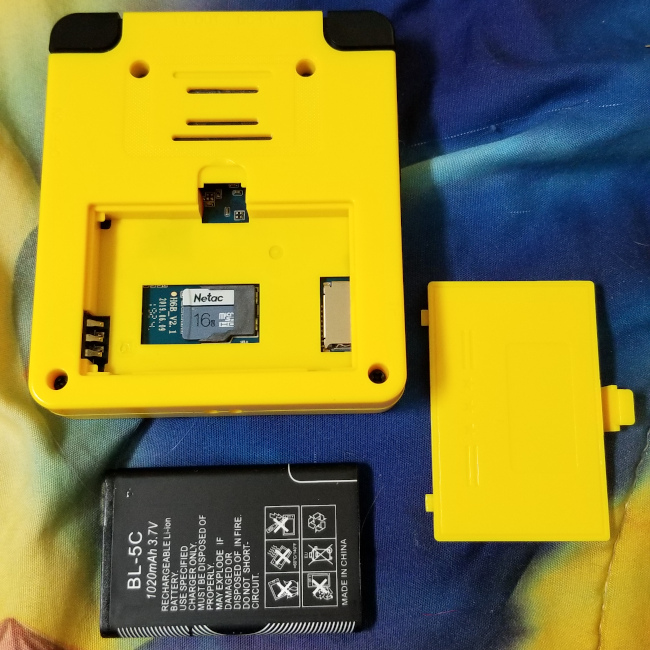 As I've gotten older, I've learned that how nice something is up front, when it's all brand new and working, isn't nearly as important as how easy it is to mend when it inevitably breaks. That applies to operating systems (GNU/Linux over Windows), household appliances (simple toaster over WiFi one), cables (S-video over handshaking DRM-saddled DisplayPort), cars (big V8 and carburetor over "hybrid"), and yes, even computers (PCs over laptops). When that battery in your 800 USD smartphone breaks, you're fucked. But this little baby? Just pop the battery out with a butter knife or switch blade, and drop in a new 5 USD one from eBay! Problem solved.

There are already fifty billion videos on CensorTube of people showing off games on the system-- but no one illustrating the TV-out functionality, which is the primary reason I wanted one of these little doggies in the first place! My goal was to replicate what the Switch does, but for "classic" games: play it on the TV (a 4:3 CRT, baby), or on the go (and it actually fits in your jeans pocket)! 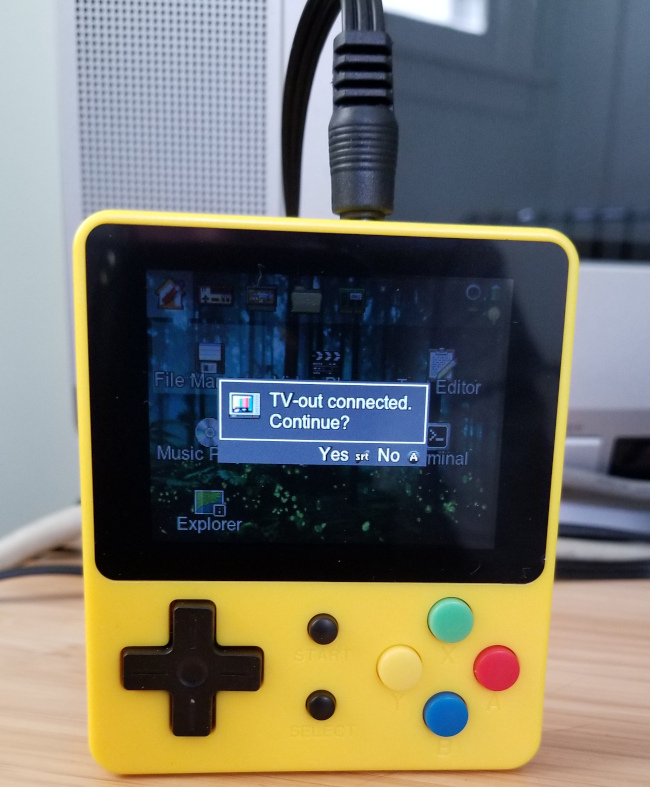 But not-so-fast, slugger: you've got a choice to make. Either you stick with the abandoned, dead-end stock firmware-- now referred to as the "Useless" firmware-- and get TV-out; or, you leap to the current developmental pathed "RetroFW"-- which hasn't re-implemented TV-out for some inexplicable reason! I asked about this regarding the "Bittboy", and let's just say the notion was shot down quicker than me asking for a date in high school.

On the other hand, it's not like these devices are even Internet-capable; they're like the non-networked 386 you had in the 1980s-- the only security you needed was a password on your "After Dark" flying toasters screensaver. And it's not like these old roms change, many of them being over thirty years old at this point! So if the emulation is solid with the stock firmware, then we don't need no stinkin' new firmware anyway.

So back to that TV-out thing... I've decided to be that one guy on the entirety of the inter-tubes to focus on that aspect. How is it? Turns out, rather glorious. There's a bit of overscan, but the colors are vibrant, and the fidelity isn't too bad! Much better than my Atari ST's RF modulator, that's for sure: 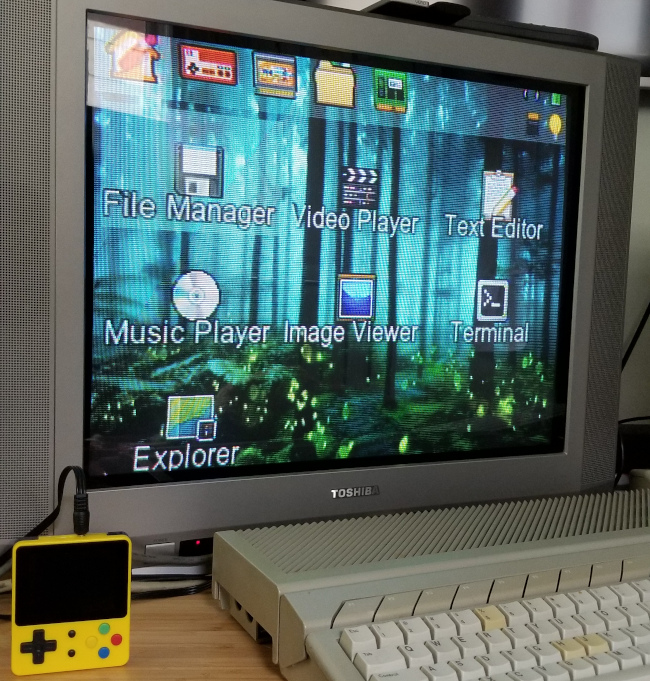 How about the emulators themselves? Do you like Super Mario Bros. 3? Who doesn't! How about on both the Super Nintendo, and the Game Boy Advance? 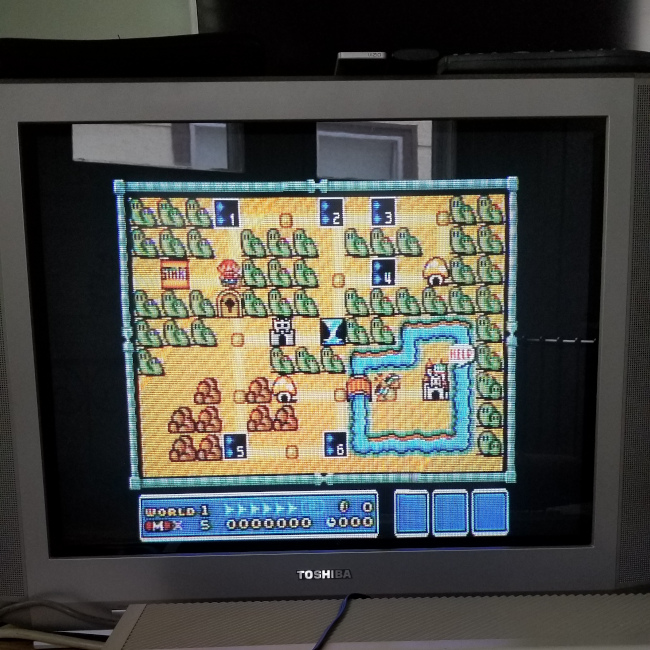 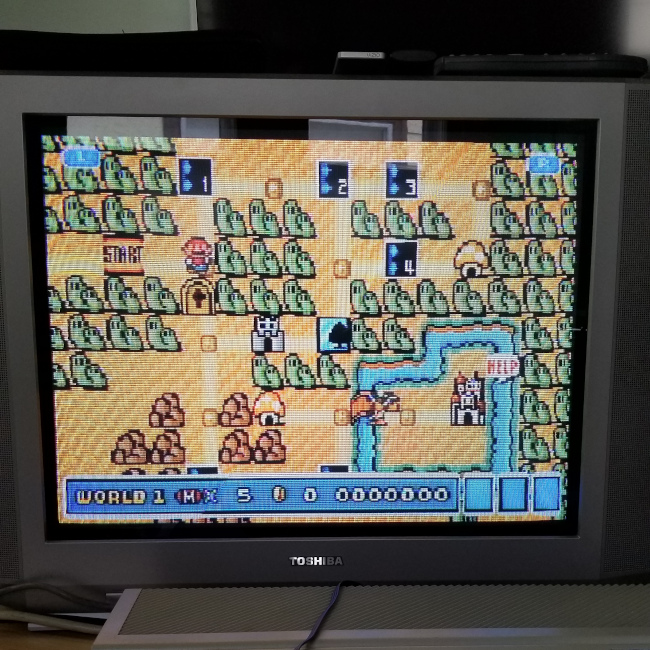 You might notice that the Game Boy Advance pixels look a little wonky... actually, a lotta-bit wonky. And it's not your imagination: the stock firmware comes with a port of the "gpSP", and while performance is good provided you feed it a slight overclock to 624 MHz, the "aspect" scaler looks rather terrible. It's usable on the tiny screen, but blown up to a TV, and... well, you can see for yourself: 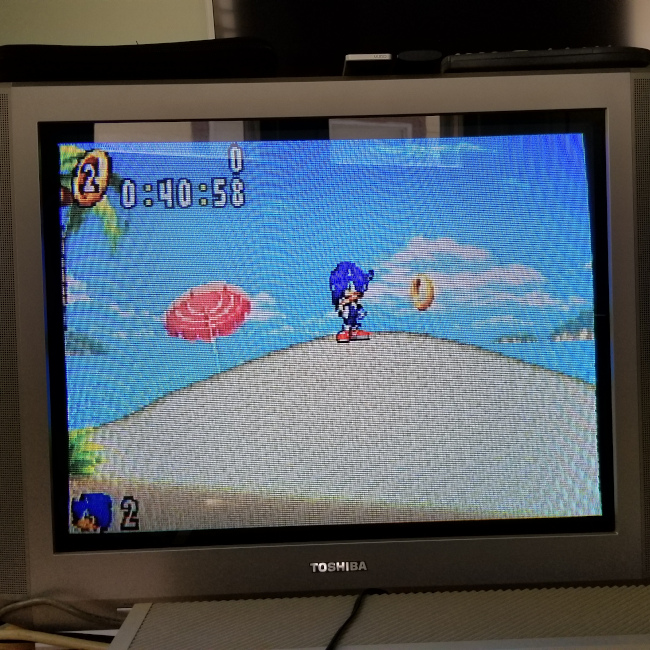 The binary for the scalar option-rich "reGBA" emulator are on the file system, but beats the heck out of me how to get it running! Executing it from the terminal revealed that it was missing a config file-- so I dropped just such a file in place, and it "freezes" while processing it. Nonetheless, I created an icon launcher for it, and I've by no means closed the door: I'll provide an update when I inevitably get it going, I just need to put some more elbow grease into it. Hopefully it will turn this baby into a perfect GBA replacement.

Thankfully though, the other emulators-- "OhBoy" for the Game Boy and Color, "Temper" for the PC Engine, and "SMS SDL" for the Master System and Game Gear, just to name a few-- look so great on the TV that I didn't even bother taking pictures. And let's not forget the Sega Genesis! Er, actually, forget about that one-- like some of the more sophisticated "smoke & mirrors", programming wizardry Atari ST games, this "PicoDrive" emulator sends some kind of crazy frequency that my conventional TV doesn't support. I bet it would work on my fancy, more versatile Sony PVM security monitor, but I haven't tried yet.

While we're speaking of "PicoDrive", other than the TV-out problems, it's easily the best emulator of the bunch that I've tried: you can tell it does some incredible bare-metal assembler, as it not only pixel-perfect fits the screen's native resolution somehow, but it's so unbelievably butter smooth-- locked at 60 fps, permanently-- that it almost beggars belief. It's no wonder it doesn't work on my TV!

Special shout-out also to "Temper": playing something as complex and rich as "Rondo of Blood" with pitch-perfect emulation on my TV, Red Book-included, means that this tiny Chinese knock-off might actually be able to replace my actual PC Engine Duo-R. I need to try more games to be sure, but it's looking promising so far.

And I've barely scratched the surface: there are dozens of emulators, and I've tried maybe six. This deal even has DOSBox-- how much you want to bet I can get "One Must Fall: 2097" working? It even has an Atari ST emulator! Hmmm. STOS programming, anyone? Or why not get even nuttier: spiritual successor to the Diamond Rio PMP300? Speaking of old DOS games, perhaps surprisingly the best part of this system are the native ports, which are absolutely astonishing. Just check out "Chocolate Doom"! It kicks the lousy Switch "Doom" and "Doom II" ports right in the nuts, on every level. It even displays the ASCII post-exit splash screen! Or how about some "Jazz Jackrabbit"? Crazy: There are loads of others which I haven't tried yet, including "ECWolf"-- regular readers will know that I marginally prefer "Wolfenstein 3d" to "Doom", so that will be a treat, if I can figure out where to drop the danged data files!

And that about wraps it up! In summary, I am thrilled to death with this device: with the exception of Genesis emulation, it does everything I want both "on the go" and "on the big screen", like the classic-games oriented Nintendo Switch I've been craving! And best of all, it's deliciously hackable, washing that disgustingly proprietary closed ecosystem flavor right out of my mouth. It's like digital Listerine! Just make sure to floss the bytes out of your gums.

And this might be as good as it's ever going to get: I strongly suspect that once newer, faster chips start circulating in this community, everything will switch to 16:9, analog sticks, and digital-only out via HDMI. So get these babies while they're hot-- they might be big collectors attractions in the not-so-distant future!

My daughter has a "Bittboy PocketGo" coming any day now which she bought with her own money, and while the firmware doesn't support TV-out, as I mentioned earlier, I'll at least take a few pictures of it and write up some impressions. Until then, I'll be playing some Game Boy Color "Dragon Warrior".