The Exigent Duality
The Big Easy - 19:11 CST, 1/07/19 (Sniper)
I haven't posted in several days, because the family and I were on vacation in New Orleans. And what a trip it was!

Where Murderapolis, and its twin brother in crime St. Paul, are dour gray concrete monstrosities mostly constructed in the past one hundred years-- with the very occasional late-19th century structure-- New Orleans has swathes of city mostly left standing from as early as the 1700s! Not only that, but the French and Spanish architectural styles are an exciting departure from the utilitarian Germanic buildings in Minnesota.

To begin, there is a street car line which has been operational since 1835. Yes, that would make the operation older than the freaking civil war. When I got there, I'd assumed that it was a "street car" in the form of a diesel bus, just with train wheels. But no: to this day, it's a literal street car, complete with noisy clanking, pneumatic pressure gauges, and a driver operation straight out of "Dr. Seuss"!

But it's not just a cheap tourist gimmick: it, and its three sister lines, are the city's mass transit system, fully-functional and highly efficient! They shuttle tens and tens of thousands of people per day, up and down the very busiest sections of the city. My very favorite spot in the entire area I visited was "Canal Street", which is a mammoth four-lane boulevard, bisected down the middle with rail tracks. I wish I would have taken a picture there. Fortunately, many other people have.

Regarding the car interiors, notice the green handle, which the driver rotates with his left hand. The brake is operated with the right hand. Also observe the wooden benches-- the cars on this line were built in 1921, and are so reconditioned as to be brand new. It's "cognitive dissonance" to the max to be riding in such a contraption, while being passed by Porsche 911s (sports cars seem to be a big thing in the Big Easy, incidentally). 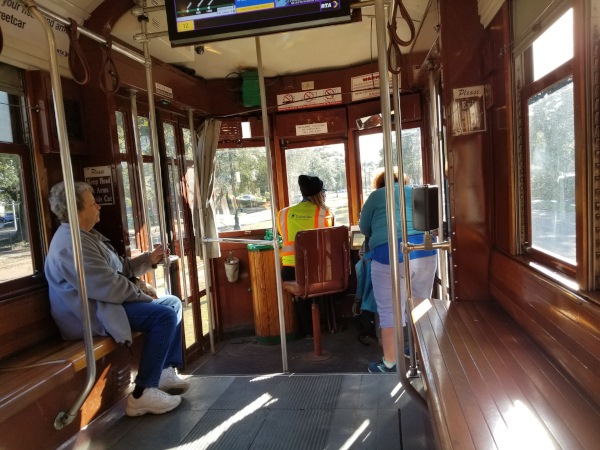 Along this line are a seemingly endless parade of 19th and even 18th century homes and buildings. One thing which caught my eye were the twin-campuses of "Tulane" and "Loyola University", both of which feature verdure green lawns and wonderfully appointed structures.

Unfortunately, I did notice a sign on one of the modern buildings, which furthers my alarm regarding the continual conflation of "law" and "social justice"-- where "justice" is according to the Cultural Marxist rubric. What kind of a world will we live in where lawmen and the courts only apply case where the outcome "furthers social justice"? I shudder to think. But that's neither here nor there. 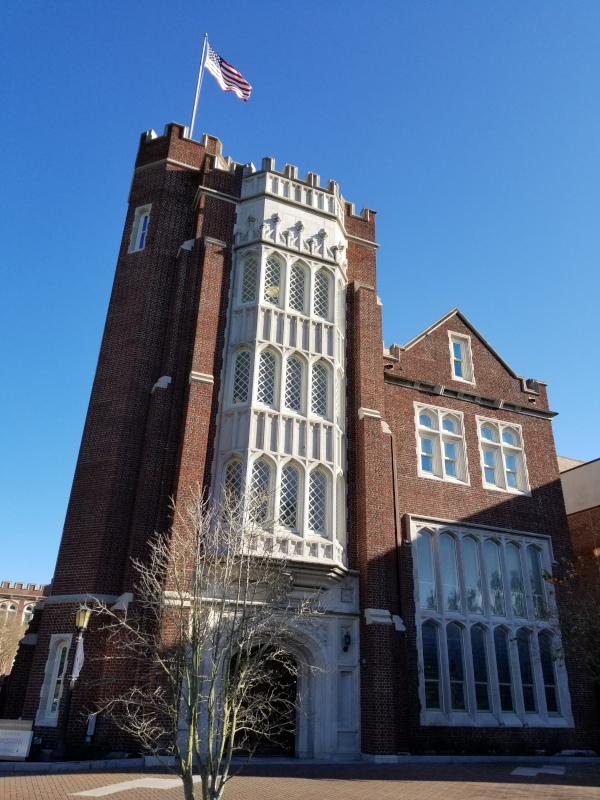 The city is also host to an exhaustive list of cemetaries, many of which are directly accessible from the aforementioned street car line. But these aren't your run-of-the-mill grave yards: they are more like mass crypts, with elaborate family-specific stone structures, sporting the epitaphs of people who died as long ago as the mid-1700s. Some are so shattered and worn that they are no longer legible.

Walking through one of these places was a somber reminder of one's mortality, especially with my kids in tow. The ages of death were often listed, and it was quite the array, from the expected infant mortalities, to those passing in their 80s and even 90s. I also saw lots of people dying in their 30s, some even at my present age of 37. 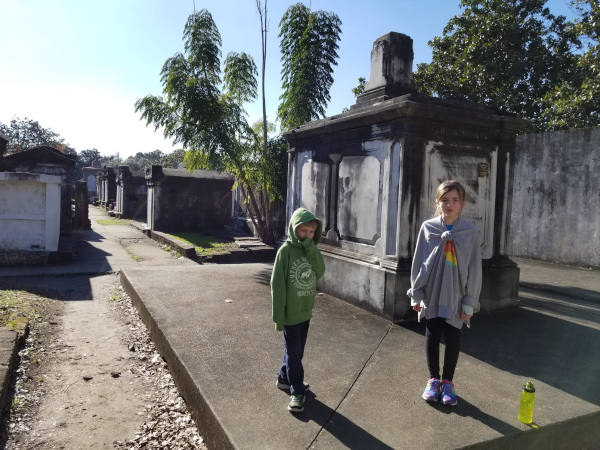 On a somewhat dystopian note, the city is also home to the nation's official "World War II Museum". It was a mere block away from my hotel, so I walked past it perhaps a dozen times, or more.

It reminded me of my recent "Tall Tales" blog post-- in this case hitting upon virtually every American-centric pseudo-fabrication regarding the conflict: how evil the "Axis" was, "Rosie the Riveter" posters, reverential passages plastered all about regarding the Beltway Elite of the era, a skyway named "American Spirit Bridge", and even a full cast statue of that immortal old ghoul, "FDR" (we can't get rid of him even 73 years after this death!). 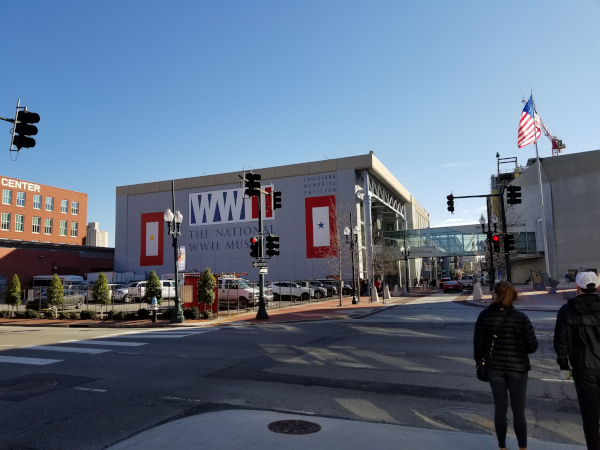 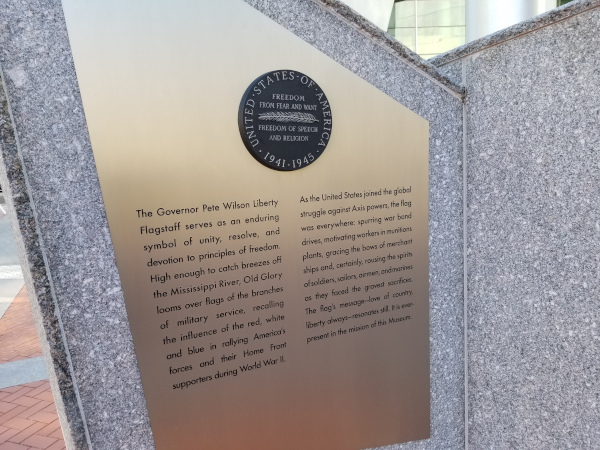 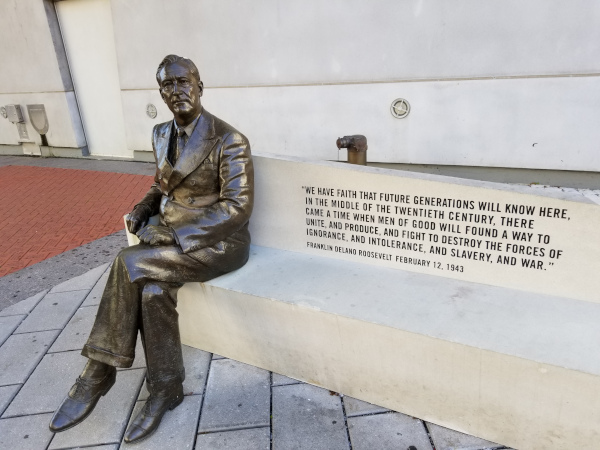 On a more positive note, I attended only my second Catholic Mass in eighteen years, in the famous "St. Louis Cathedral".

It was quite an emotional experience for me between the overwhelming setting (frickin' Andrew Jackson had an oration in his honor in that very same cathedral, in 1840), the rushing forth of my childhood memories spent in churches, the glimmer that maybe I haven't strayed as far from God as I thought I'd had (I've lived an honest life), and a reflection on some of the rough and frustrating times I've had, both deep in the past and more recently.

I guess you could say it was a... spiritual experience. Which, I suppose, is sort of the point of going to church, after all. 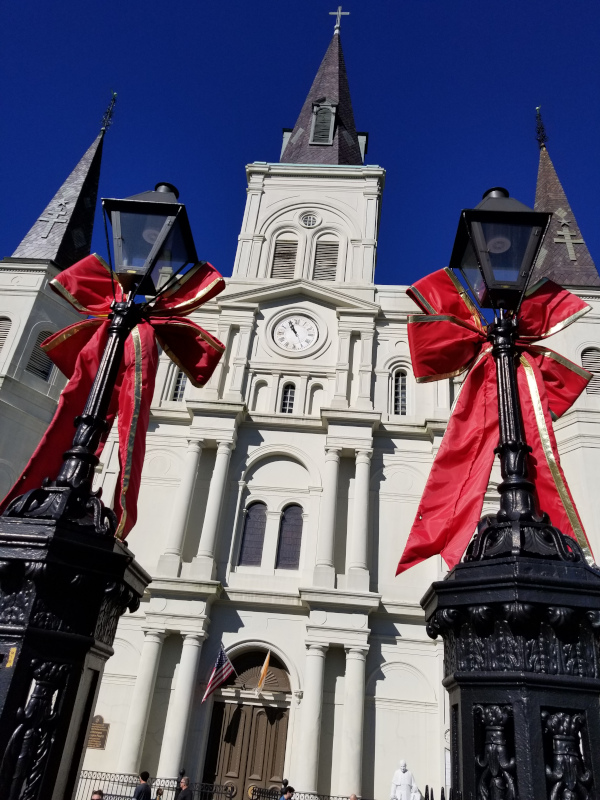 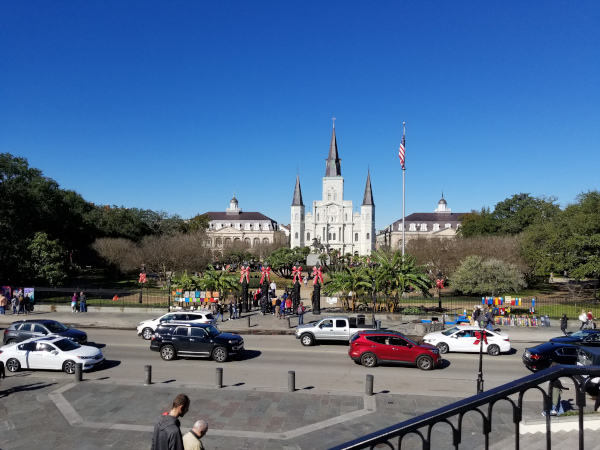 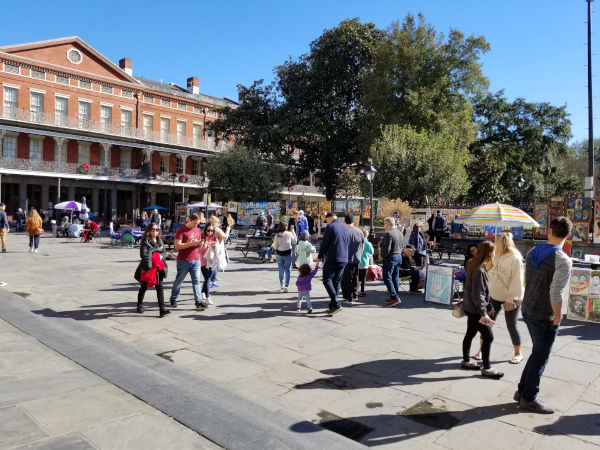 Before I'd gone to the cathedral, I'd used The Gimp to rotate and overlay an original map of the initial city, from 1728, with the modern-day Google Maps image of the French Quarter. It is astonishing how cleanly it stacks, right down to the presence of the very spots in which I stood taking the above three pictures.

Finally, here is a shot of wifey and the kids in front of some kind of cruise ship which was moored there. The ship had to be the size of a six-story building, the photograph doesn't do the scale justice. We wound up sitting near the ship, happily munching on some of the world famous "Cafe Du Mond" beignets, basking in the sun. 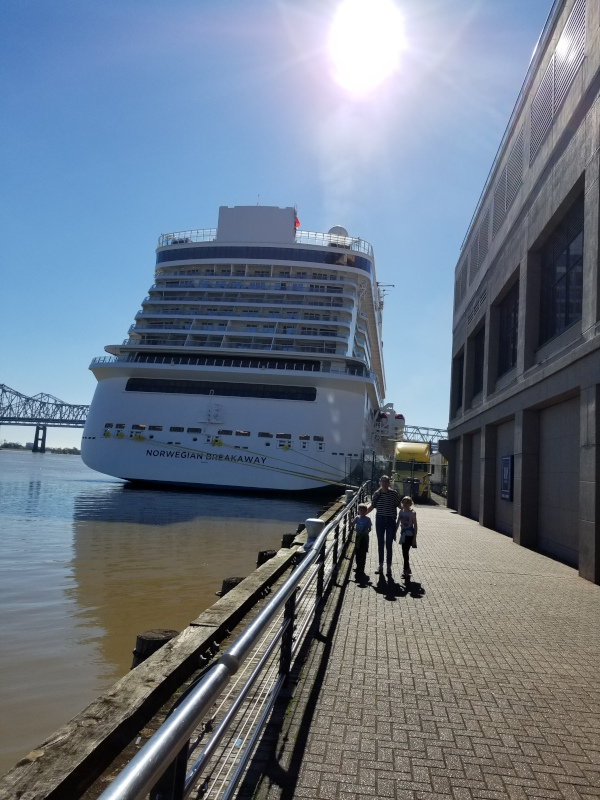 Of all the places I've traveled in my life-- which isn't many, admittedly, though it is more than a few (Boston, Orlando, San Mateo, Philadelpha, and others)-- New Orleans is the place which has stolen my heart. If I could pack up my bags and just move there permanently, I would. Its strange cultural mix ("Creole", as I learned) and mind bogglingly-preserved authenticity separates it from anywhere else I've yet been.

It's such a pity that, in today's political climate, I did have some hint of being "behind enemy lines": CNN was blaring everywhere I went, "the Democrats need to GO TO WAR against this racist President", and other such insane declarations. It's tough to say how many people in the city really buy into such rhetoric, but there is no doubt at least that the Establishment Elite are attempting to rally the troops.

Hopefully we won't be on opposite teams when the oligarchs draw the lines, because I was met with nothing but graciousness by the city's inhabitants, and felt like I "fit in" with the place's eclectic crowd and eccentric character.