The Exigent Duality
Meeting a Role Model - 04:48 CDT, 8/09/22 (Sniper)
There is a Minnesotan gal named Emily Roberts, who started a YouTube channel some years ago called "Snake Discovery". Like former "Justice and Drew" producer and fellow successful entrepreneurial young woman, Sam Sansevere, Roberts grew her channel into a 2.75 million subscriber phenomenon. It's been so successful in fact that Roberts has opened her own zoo, where she hosts birthday parties and the like.

My daughter has been on the journey with the YouTube channel as it has grown, and Emily Roberts has been a bit of a role model for her. Fast forward to a few days ago when my daughter went to a friend's birthday party and got to meet Emily in person! Anyone who knows my daughter understands that this was a pretty big deal for her. My daughter even knows all of Roberts's snakes-- "The one in the picture is 'Doug'", she explained to me: 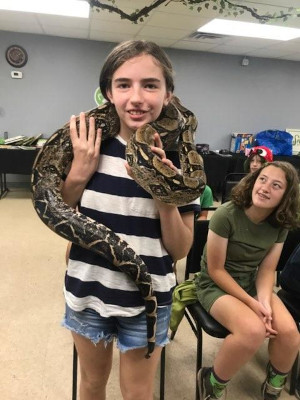 My daughter already cares for twelve chickens, two guinea pigs, and five cats. She is going to do some pretty heavy work on her bedroom over the coming months, re-painting and re-arranging so that a pair of garter snakes, with the entire setup that they require, can join the "piggers" and our elderly cat in her room. I'll have pictures in the future once she's done with the project.

I was talking about God calling people to vocations with my kids the other day, and my daughter sees this and a hundred other little events as clear signs of God opening doors for her, showing her the path on which to walk.