The Exigent Duality
Brand New 3DO - 15:30 CST, 1/14/22 (Sniper)
A couple of weeks ago, I ordered a brand new, complete-in-box Japanese Panasonic FZ-10. After tax and shipping, it ran me just under 540 USD. Adjusted for inflation, that's less than the system originally sold for. This is the first time I've had functioning 3DO hardware in quite a while: money well spent given it's my favorite game platform of all time.

For preservation purposes, I took a bunch of unboxing pictures. These first ones are of the box exterior. It had a number of dings and scuffs in it, having evidently been in storage for decades. As an aside, 3DOs are all "region free"-- but the Japanese units are more desirable because they contain a Kanji font which is missing from the US firmware, meaning they can run the entire software library 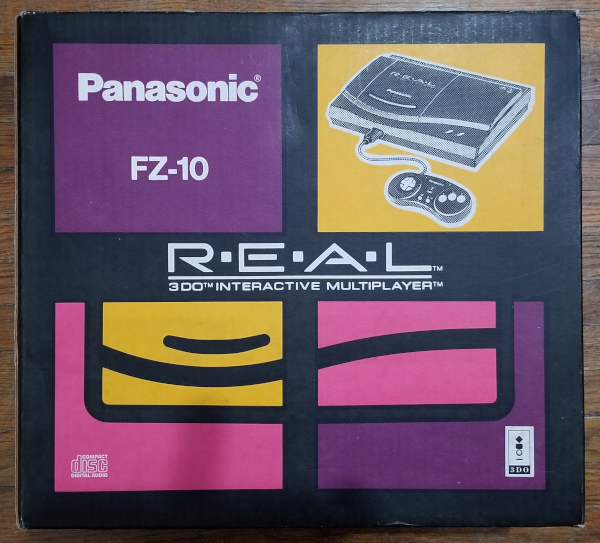 This next one is extra cool: the box still had the original price tag on it! 39,800 Yen comes out to about 350 USD, in today's conversion rates anyhow. That's about 620 USD in today's money. 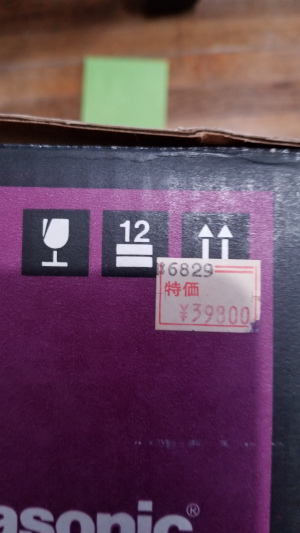 What is that weird certificate thing in the green envelope on top of the box? I still need to get a Japanese friend to translate this for me. Purchase date was in 1996. So this is a very late 3DO. 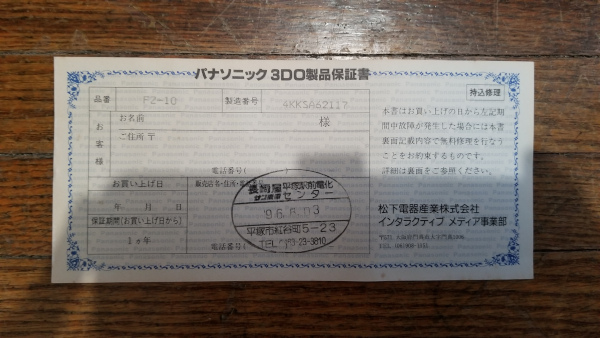 But back to the unboxing. 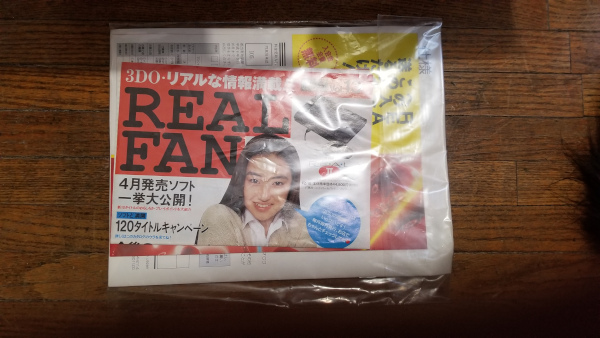 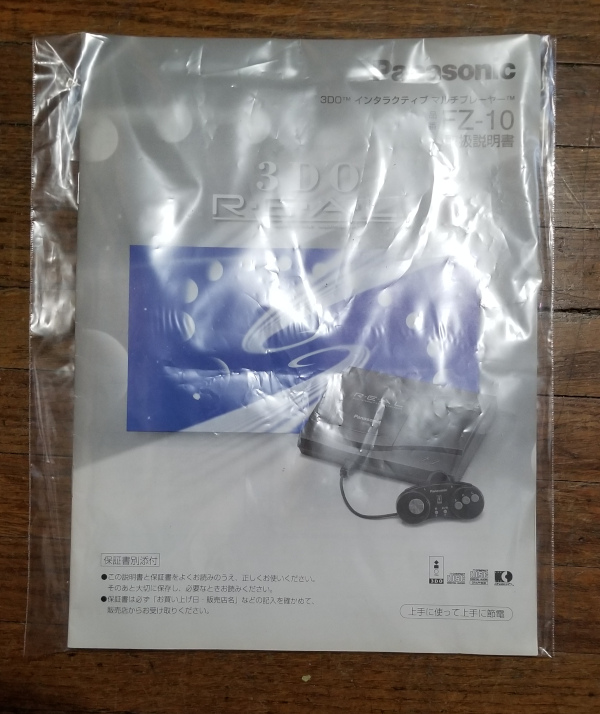 I really like how all of the packaging uses this cute Japanese girl. Aiming for the teenage boy audience, for sure. Click on the interior brochure shots for huge versions.

Pay extra attention to the list of peripherals in the second brochure interior shot, on the bottom. Very, very interesting. What are those last three, on the top row? Or what about those final two on the bottom row? Did these products ever come out? It wound be fun to collect them. 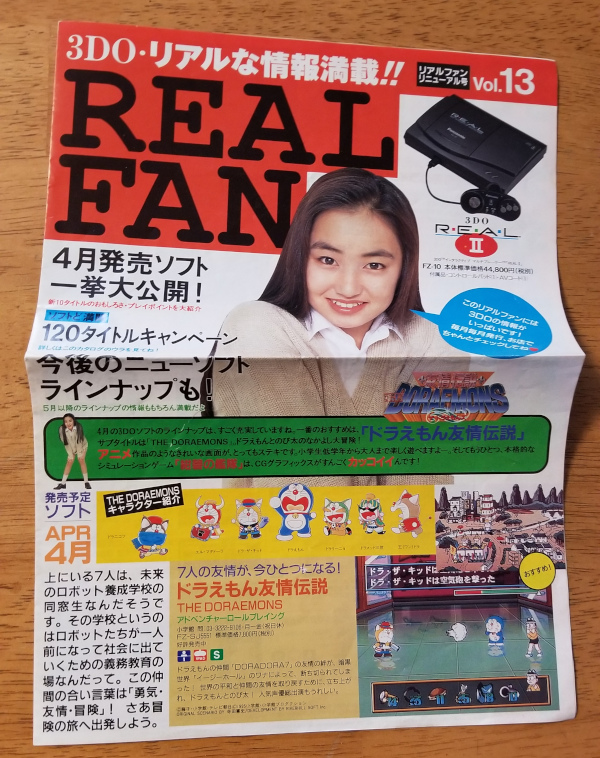 I forget how big Karaoke is in Japan. I've never considered that the 3DO could be used as a Karaoke machine, yet here it is prominently demonstrated in the manual as one of the product use cases. 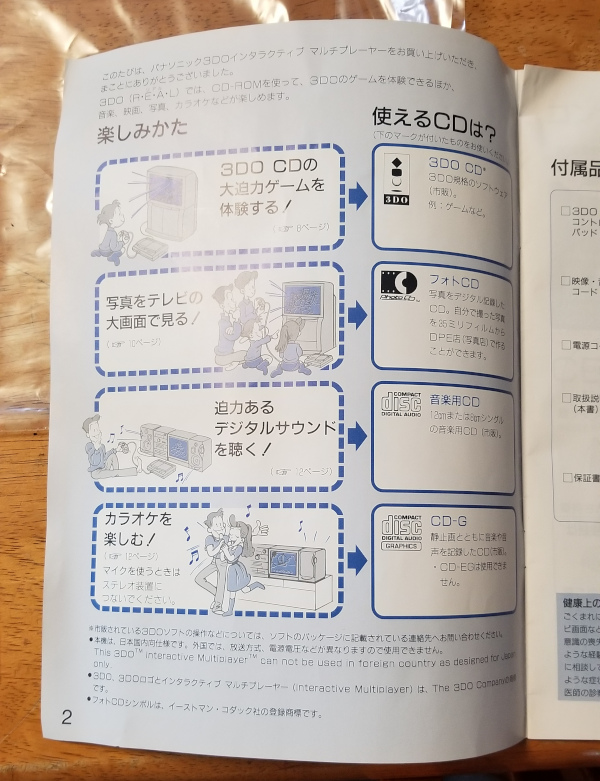 I wonder if I sent in for one of these cards, if they'd still send me one? Without further ado, the system itself, with my daughter the hand model. 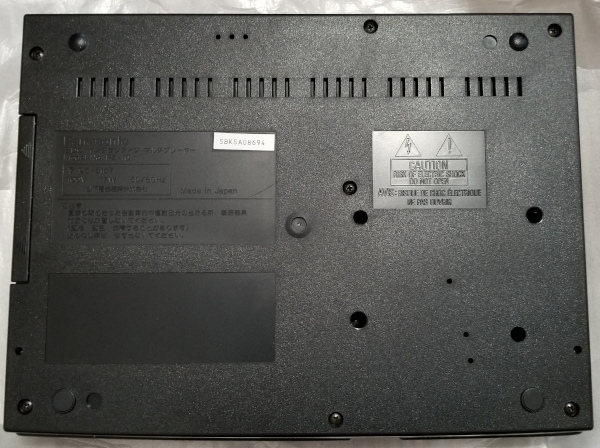 An interesting thing happened when I turned it on and accessed the integrated file manager (no more Sampler CD for me!) for the first time: there were a series of bizarrely-named files on the chip already, with nearly identical file sizes. 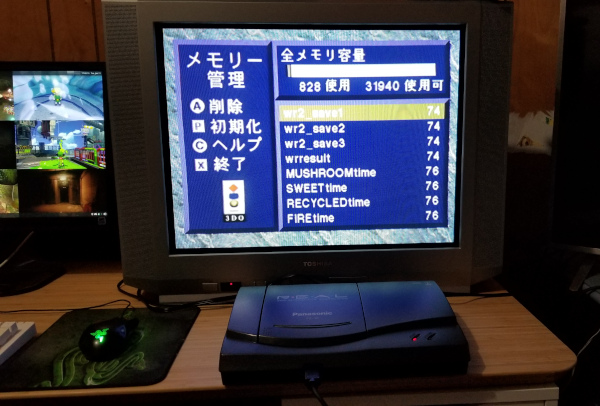 My first reaction was, "This is almost brand new, but not quite." But the unit itself had not so much as a piece of hair on it, much less any scuffs-- and as it ran, I could smell the new electronic burn-in smell, the kind I got from my PlayStation 5 and Series X last year.

But this time, from a twenty six year-old piece of electronics. How cool is that?

"No, it must be something else." Suddenly I was reminded of old footage from the 80s and 90s, watching computer devices run down the line, with women plugging chips in, pressing a few quality control test buttons, then unplugging them for seating into the motherboards. Then it hit me: maybe this was test data, and the person on the line got distracted, forgot the press the "wipe" key, and the chip got seated with the data still on it?

It's just a hypothesis, but it fits the available information.

Now that we're done with the unboxing, what do I plan to use this new 3DO for? Well, I bought a cheap S-Video USB capture device from Amazon, along with S-Video and Composite splitters. This allows me to use OBS Studio in Manjaro Linux to capture video, screenshots, and audio from the 3DO while I'm simultaneously playing on the actual CRT TV.

Here is an example of the kind of screenshot I can capture. You just right-click on the "Scene" in OBS Studio, in the bottom-left pane, and select the screenshot option. I love how the shots have noise in them: they remind me of old magazine or hint book scans. Lots of charm and character. 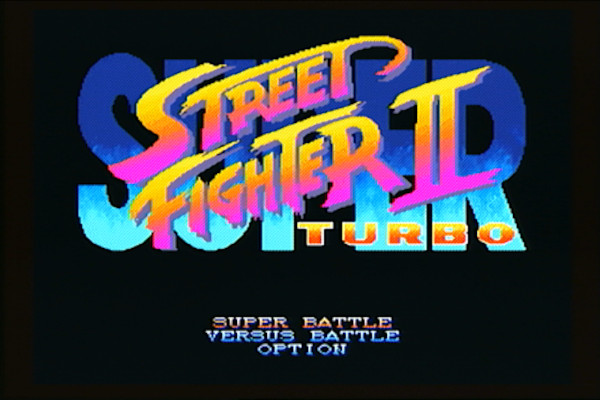 I did find out that the above capture device is mono only for audio-- so I wound up running that side of the composite split to a composite-to-3.5mm adapter, into the line-in on my PC motherboard, for stereo sound recording. Also, the picture through the splitter is observably darker on the television than without-- but I was able to correct that with TV calibration, with only very mild and totally acceptable (to me) washout.

Once my room is all complete, I will run a composite and S-Video switch to this setup, so I will be able to capture from all of my systems with the press of a button to flip between them. For video recording, I'll still probably use RetroArch, as the framerate is not absolutely perfect with this cheap capture device.

But my primary use case is screenshots. I want to do a series of blog posts about the 3DO library over the coming months and years, with tons of captures. So look forward to that, if that's your dig.